Parents are more willing to let their children see intense gun violence in PG-13 movies when the violence appears to be “justified,” used in defense of a loved one or for self-protection, than when it has no socially redeeming purpose, a new study finds.

But even when the gun violence in PG-13 movies appears justified, parents think that the movies are more suitable for teens age 15 and up, two years older than suggested by the movie industry ratings board’s PG-13 rating. Parents thought movies with unjustified but bloodless gun violence were more appropriate for 16-year-olds, the study finds.

The study, “Parental Desensitization to Gun Violence in PG-13 Movies,” by researchers at the Annenberg Public Policy Center was published online in the journal Pediatrics on May 14 and will be in the June issue.

“The findings suggest that parents may want a new rating, PG-15, for movies with intense violence,” said lead author Daniel Romer, research director of the Annenberg Public Policy Center (APPC). “Violent movies often get a PG-13 rating by omitting the consequences of violence such as blood and suffering, and by making the use of violence seem justified. But parents of teenagers say that even scenes of justified violence are upsetting and more appropriate for teens who are at least 15.”

The rise of gun violence in PG-13 movies

Past studies by APPC researchers found that gun violence in the most popular PG-13 movies has more than doubled since the rating was introduced in 1984, and now exceeds the gun violence in comparable R-rated films. In the earliest years of the PG-13 rating, less than a third of the 30 top-grossing films were rated PG-13 but recently more than half were PG-13. In past research on the growing acceptance of gun violence in PG-13 movies, APPC researchers found that parents appeared to become desensitized to violence as they watched successive movie clips.

The current experiment was designed to understand whether parents became more accepting of the movie violence because they were being emotionally numbed to it or whether the justification for the violence influenced them. Could justified violence be less upsetting than unjustified violence? And could parents who repeatedly saw the kind of bloodless, justified violence featured in PG-13 movies become so accustomed to it that they experience a kind of “normative desensitization” that leads to greater acceptance of its viewing by children?

Scenes from the R-rated movies were edited to remove graphic and potentially upsetting consequences such as blood and suffering to mimic the effect of PG-13 movies. (PG-13 means parents are strongly cautioned that some material “may be inappropriate for children under 13.” The more restricted R rating means viewers under 17 must be accompanied by a parent or adult.) 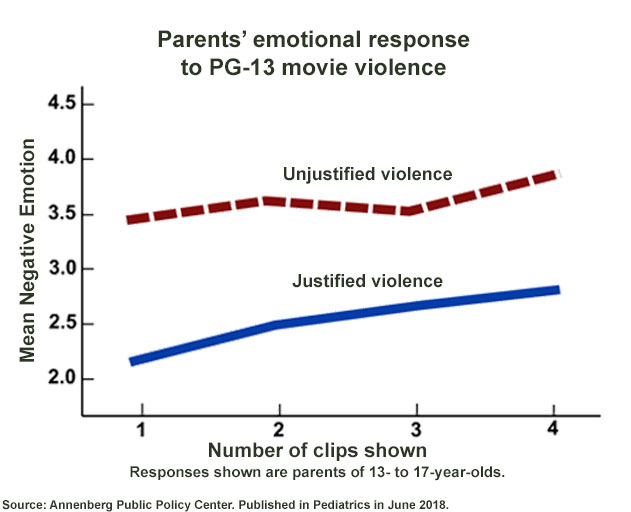 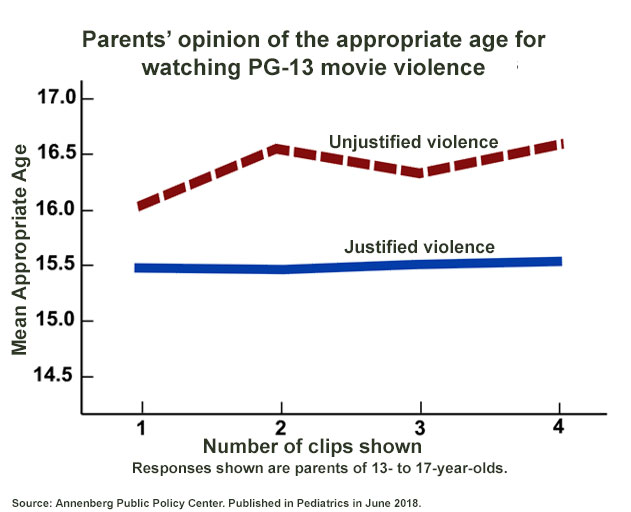 One exception: The parents who were frequent moviegoers were the most permissive, saying that movies with unjustified violence were suitable for 13-year-olds.

As parents watched the series of movie scenes of unjustified gun violence, they became more restrictive on the appropriate age for viewing, the study found. But that wasn’t true with the justified scenes of violence, where parents’ opinion of the appropriate viewing age held steady. The researchers also found that when watching the successive justified movie clips, parents increasingly regarded the gun violence itself as justified.

The American Academy of Pediatrics has been long concerned about the effects of media violence. In a statement in 2016, the academy pointed to a body of research showing that viewing violent media content can influence some youth to become more aggressive. (See a Pediatrics blog post by editor in chief Lewis First on this current study here.)

A recent study by Ohio State University researchers found that children 8 to 12 years old who saw scenes of a PG-rated movie with guns played longer with a real gun and pulled the trigger more often than children who saw a movie without guns.

“Despite such evidence, we still don’t know whether repeatedly seeing movies with justified violence teaches children that using guns is OK if they think it’s justified,” Romer said.

He added that filmmakers appear to be taking advantage of the movie rating system.

“Hollywood is exploiting the movie rating system by leaving out harmful consequences like blood and suffering from PG-13 films,” Romer said. “By sanitizing the effects of violence, moviemakers are able to get a PG-13 rating and a wider audience for their films. But this gun violence may be just as brutal and potentially harmful to young viewers.”

For related news coverage of this study: