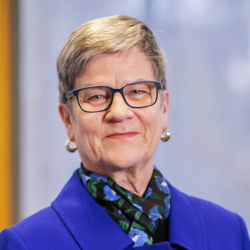 Kathleen Hall Jamieson is the Elizabeth Ware Packard Professor at the Annenberg School for Communication of the University of Pennsylvania, the Walter and Leonore Annenberg Director of the university’s Annenberg Public Policy Center, and Program Director of the Annenberg Retreat at Sunnylands. She has authored or co-authored 17 books, including Creating Conspiracy Beliefs: How Our Thoughts Are Shaped (2022) and Cyberwar: How Russian Hackers and Trolls Helped Elect a President, which won the Association of American Publishers' 2019 R.R. Hawkins Award. Six of the books that Jamieson has authored or co-authored have received a total of 12 political science or communication book awards (Cyberwar, Packaging the Presidency, Eloquence in an Electronic Age, Spiral of Cynicism, Presidents Creating the Presidency, and The Obama Victory). She co-edited The Oxford Handbook of Political Communication and The Oxford Handbook of the Science of Science Communication. In 2020, the National Academy of Sciences awarded Jamieson its Public Welfare Medal for her “non-partisan crusade to ensure the integrity of facts in public discourse and development of the science of scientific communication to promote public understanding of complex issues.” Jamieson is a member of the American Philosophical Society and the National Academy of Sciences, and a Distinguished Scholar of the National Communication Association. She also is a fellow of the American Academy of Arts and Sciences, the American Association for the Advancement of Science, the American Academy of Political and Social Science, and the International Communication Association, and a past president of the American Academy of Political and Social Science. Jamieson has won university-wide teaching awards at each of the three universities at which she has taught and has delivered the American Political Science Association’s Ithiel de Sola Pool Lecture, the National Communication Association’s Arnold Lecture, and the NASEM Division of Behavioral and Social Sciences and Education's Henry and Bryna David Lecture. Her paper “Implications of the Demise of ‘Fact’ in Political Discourse” received the American Philosophical Society’s 2016 Henry Allen Moe Prize. She is the co-founder of FactCheck.org and its SciCheck project, and director of The Sunnylands Constitution Project, which has produced more than 30 award-winning films on the Constitution for high school students.