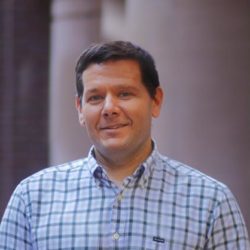 Matthew Levendusky, the Stephen and Mary Baran Chair in the Institutions of Democracy at the Annenberg Public Policy Center (APPC), is director of APPC's Institutions of Democracy division and a professor of political science at the University of Pennsylvania. He also is director of the ongoing Institutions of Democracy study, which is the basis for the forthcoming Democracy Amid Crises: Polarization, Pandemic, Protests, and Persuasion (Oxford University Press, 2023; co-authored with the Annenberg IOD Collaborative). He previously was an assistant (2007-2013) and associate (2013-2018) professor of political science at Penn and a postdoctoral research associate at the Center for the Study of American Politics at Yale University (2006-2007). He obtained his Ph.D. from Stanford University. He is the author of The Partisan Sort (University of Chicago Press, 2009), How Partisan Media Polarize America (University of Chicago Press, 2013), Our Common Bonds: Using What Americans Share to Overcome the Partisan Divide (University of Chicago Press, 2023), and the co-author of We Need to Talk: How Cross-Party Dialogue Reduces Affective Polarization (Cambridge Elements in Experimental Political Science, 2021; co-authored with Dominik Stecula). His research focuses on understanding how institutions and elites influence the political behavior of ordinary citizens, including studies of mass polarization, the effects of partisan media, and various other topics.