The amount of gun violence in top-grossing PG-13 movies, which can be seen by children of all ages, has continued to exceed the gun violence in the biggest box-office R-rated films, a new analysis published in the journal Pediatrics shows.

The analysis of movies from 1985-2015 by researchers at the Annenberg Public Policy Center (APPC) of the University of Pennsylvania updates an earlier APPC study which found that gun violence in top-grossing PG-13 movies began to exceed that in comparable R-rated movies in 2012. The earlier study found that portrayals of gun violence in top-grossing PG-13 movies had more than doubled from 1985 through 2012.

The new analysis extends the earlier finding by including movies from 2013-2015.

“The increasing trend of gun violence in PG-13 movies that we detected in 2012 continues unabated,” said Dan Romer, research director of the Annenberg Public Policy Center and lead author of the article. “We were interested in seeing if the trend might have stalled or even reversed.  Our findings suggest that Hollywood continues to rely on gun violence as a prominent feature in its highly popular PG-13 action-oriented films.” (See more on the trend here.)

“The Continuing Rise of Gun Violence in PG-13 Movies, 1985-2015” was published online as a Pediatrics Perspectives article on January 11, 2017. (Subscription may be required for the article, which is here.) 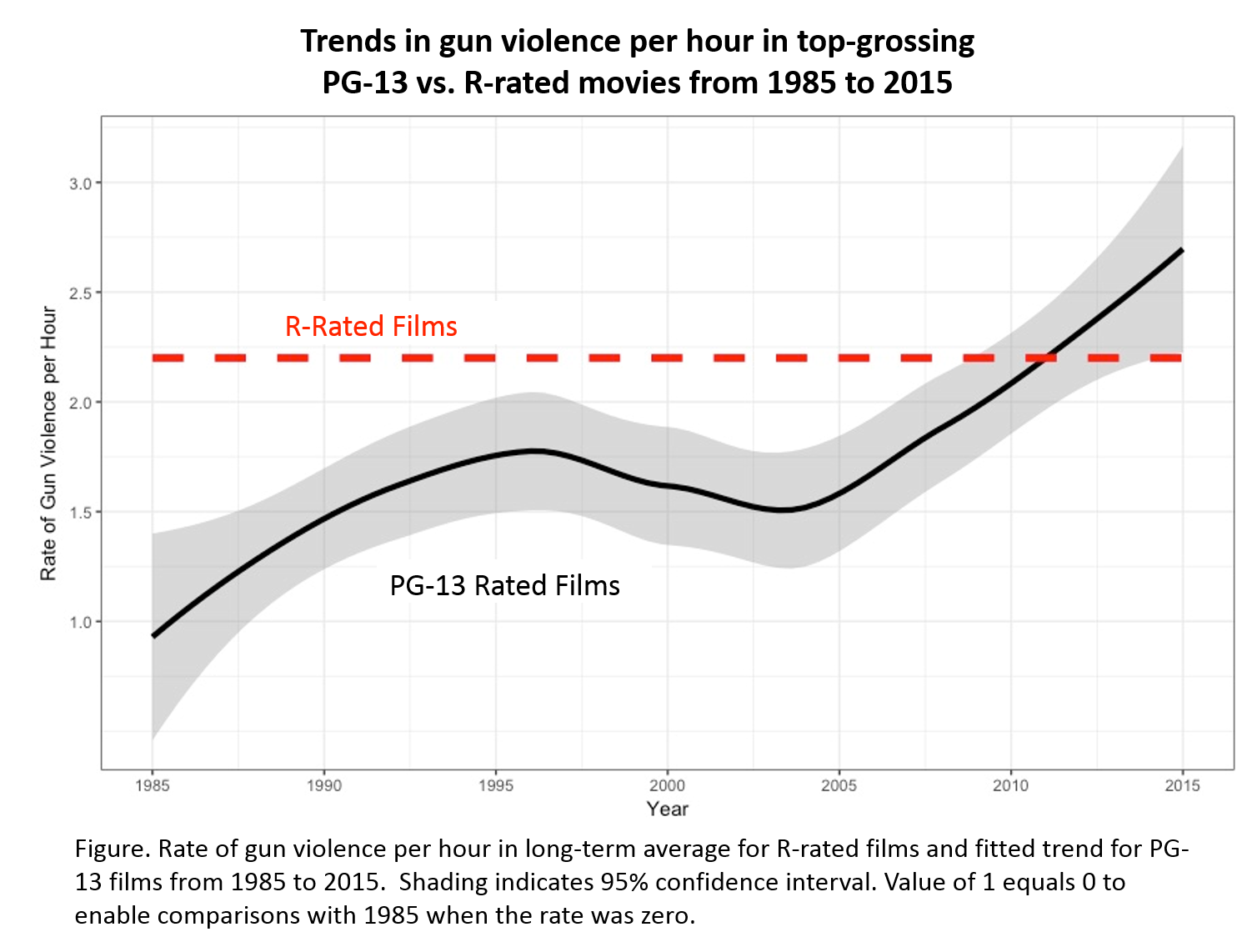 The researchers state: “What increasingly differentiates the instances of gun violence in PG-13 films from those rated R is not only the higher frequency in the PG-13 category but also those films’ erasure of the consequences (e.g., blood and suffering) and greater likelihood that the violence will be perpetrated by or on comic book-inspired heroes and antiheroes (e.g., Batman, Avengers, and X-Men).” The director of the ratings board of the Motion Picture Association of America (MPAA) told the Associated Press that violence by comic-book characters represents “a less realistic kind of violence that’s neither graphic nor brutal,” and so, by implication, is less harmful to children than R-rated movie violence.

Consistent with that philosophy, PG-13 movies may feature extensive though largely bloodless violence. The 2016 movie “Suicide Squad,” rated PG-13, includes “lots of action violence, from close-up execution-style murders to large-scale battles and widespread destruction that leads to the deaths of innocent bystanders,” Common Sense Media told parents in its review.

Unlike R-rated movies, which are restricted to viewers 17 or older unless accompanied by an adult, PG-13 movies are open to all. A PG-13 rating says that parents are “strongly cautioned” that “some material may be inappropriate for children under 13.”

Even as gun violence within PG-13 movies is growing, PG-13 movies have come to lead the box office. The MPAA created the PG-13 rating in 1984 following the parental outcry over disturbing content in PG-rated movies such as “Indiana Jones and the Temple of Doom.” In the first three full years of the rating (1985-87), less than a third of the 30 top-grossing movies were PG-13, but more than half were PG-13 by 2013-15. Over that same period, movies with an R rating declined from 40 percent to 23 percent among the top 30, “paralleling a gradual shift of violent content in top-grossing movies from the R to PG-13 category,” the researchers said.

“As a result, movie-going families are now undergoing an experiment in which children of any age can enter a theater to watch a PG-13 film in which the protagonists gain power, settle conflicts, and kill or are killed by lethal weapons,” the APPC researchers said.

The American Academy of Pediatrics has noted the large body of research showing that repeatedly viewing violent media content can influence some youth to become more aggressive. Nevertheless, we know less about the potential effects of films that glorify the use of guns.

The researchers concluded that until we know more about the effects of repeated exposure to gun violence, pediatricians “should consider advising parents to be cautious about exposing their children to the gun violence in PG-13 movies.” The article authors also called for research into the MPAA’s apparent belief that bloodless gun violence perpetrated by comic book characters is less harmful than gun violence that shows blood and other impacts on more realistic characters.

News coverage of this study includes:

Dan Romer appeared on CBS Weekend News on January 15 to discuss the findings of the report. See excerpts of their segment below: