Research into why adolescent drivers are involved in motor vehicle crashes, the leading cause of injury and death among 16- to 19-year-olds in the United States, has often focused on driving experience and skills. But a new study suggests that development of the adolescent brain may play a critical role in whether a teenager is more likely to crash.

The study finds that slower growth in the development of working memory is associated with motor vehicle crashes, which points to cognitive development screening as a potential new strategy for identifying and tailoring driving interventions for teens at high risk for crashes.

The study, led by researchers at the Annenberg Public Policy Center of the University of Pennsylvania (APPC) and Children’s Hospital of Philadelphia (CHOP), is the first longitudinal study of working memory development in relation to vehicle crashes. The paper “Working Memory Development and Motor Vehicle Crashes in Young Drivers” was published today in JAMA Network Open.

The research examines data from 118 youth in Philadelphia who were part of a larger group that participated in a six-wave survey from when they were 10- to 12-year-olds, in 2005, until they were 18- to 20-year-olds, in 2013-14. The survey measured working memory development, as well as associated risk-related traits and behaviors. This group later participated in a follow-up survey on driving experience.

“We found that teens who had slower development in working memory were more likely to report being in a crash,” said the lead author, Elizabeth A. Walshe, Ph.D., who is a postdoctoral fellow at the Annenberg Public Policy Center and at the Center for Injury Research and Prevention at CHOP.

Working memory, which develops through adolescence into the twenties, is a frontal lobe process associated with complex, moment-to-moment tasks essential to driving. “Safe driving involves scanning, monitoring, and updating information about the vehicle and environment while managing multiple subtasks (e.g., adjusting speed, steering, in-vehicle controls) and distractors (e.g., peer passengers and cell phones),” the researchers said in their paper. All of these tasks challenge working memory, especially when a young driver has not yet fully learned to automate many basic driving routines.

Adolescent drivers have the highest rate of crashes, injuries, and mortality. While poor skills and inexperience explain some of the risk shortly after a new driver receives a license, crash risk is inversely related to age during the early years of driving. In other words, among equally new drivers, those who are 17 years old have a higher crash rate than those who are 20 years old, which suggests a possible developmental link.

“Not all young drivers crash,” Walshe said. “So we thought, what is it about those who are crashing? It could be related to variability in working memory development.”

Prior research has shown a link between lower working memory capacity and reckless and inattentive driving, crashes, and poor performance on simulated driving tasks. For the current study, the researchers recruited participants from the Philadelphia Trajectory Study, a broad six-wave study conducted by researchers at APPC and CHOP. Across seven years – when the adolescents were 11-13 years old to 18-20 years old – this study measured the change in working memory and other characteristics. Subsequently, in 2015, 118 young adults, including 84 drivers and 34 non-drivers, took the follow-up survey on driving. Among the drivers, 25 reported having a crash history and 59 reported no crash history. 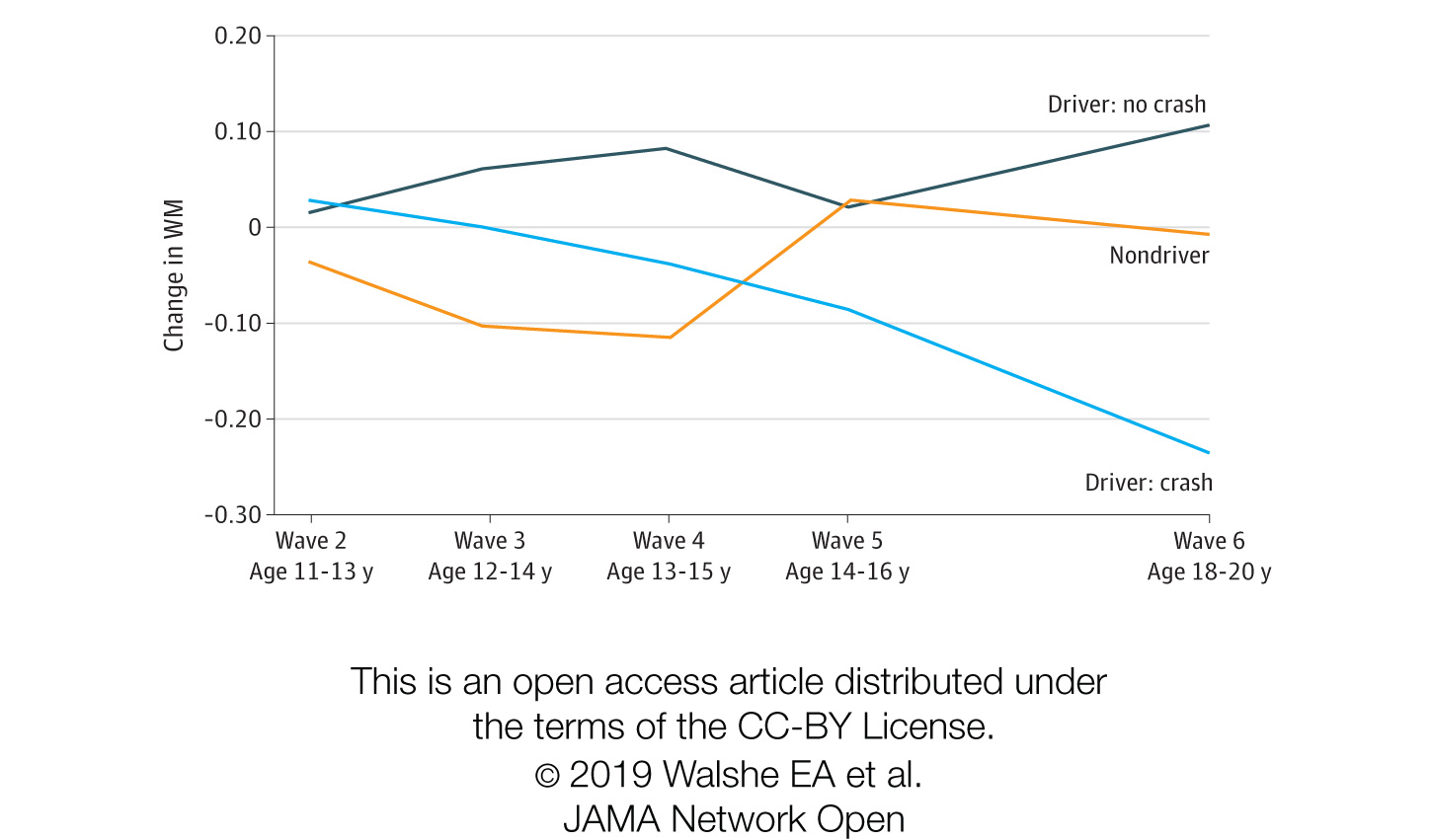 The analysis controlled for other risk-related factors including reckless driving and drug use.

The researchers say the results have important policy implications. While all 50 states have some type of graduated driver licensing (GDL) program that gradually lifts restrictions for young new drivers, the research suggests that individual assessments of adolescents’ cognitive development may play an important part, too.

“If our findings hold up in larger samples with diverse youth, we will need to start assessing cognitive abilities, such as working memory, to see if some adolescents are less ready for independent driving,” said Daniel Romer, Ph.D., research director of the Annenberg Public Policy Center and a senior fellow at the Center for Injury Research and Prevention at CHOP. “There is considerable variation in working memory development during the teen years, and some teens may not be as ready to drive on their own without additional assistance.”

Flaura K. Winston, M.D., Ph.D., founder and scientific director of the Century for Injury Research and Prevention at CHOP, said that enabling teens to become safe drivers is a health concern for physicians. Prior research has focused on driving skills and experience, but this study examines cognitive development in typical adolescents and suggests that individual variation plays a critical role.

“This research points to the fact that crashes are predictable and preventable,” said Winston, who also is an APPC distinguished research fellow. “It focuses attention more on the role of the driver and the driver’s clinician. A clinician could identify teens who will be at an increased risk and use ‘precision prevention’ to tailor anticipatory guidance so that young drivers achieve independent mobility in a safe way.”

Precision prevention, Winston said, could provide different types of driver training or a release from driving restrictions at different times based on their development.

The researchers said that some form of standardized screening or testing during adolescence could determine which teens have slower development of working memory. “Ideally, we’d be able to offer interventions like driver training or technologies like in-vehicle alert systems to assist new drivers who need it,” Walshe said.

In addition to Walshe, Romer, and Winston, the study was conducted by Laura M. Betancourt, Ph.D., and Kristin Arena, B.S., at CHOP, and Atika Khurana, Ph.D., of the College of Education, University of Oregon, who is also an APPC distinguished research fellow.

The Annenberg Public Policy Center was established in 1993 to educate the public and policy makers about the role of communication in advancing public understanding of political, health, and science issues at the local, state, and federal levels.

Founded in 1997, the Center for Injury Research and Prevention at Children’s Hospital of Philadelphia advances the safety of children, adolescents, and young adults through comprehensive injury prevention and safety research resulting in practical resources to reduce injury and promote recovery.