The United States has not changed the four text warnings on the side of cigarette packs since 1984. Although the U.S. Congress mandated nine health messages and pictorial warnings in 2009, efforts to implement the labels by the Food and Drug Administration have been stymied by tobacco industry court challenges. 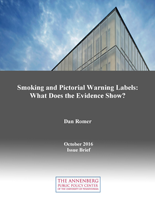 In a new issue brief, Annenberg Public Policy Center (APPC) research director Dan Romer reviews the evidence accumulated by APPC on the effectiveness of pictorial warning labels on cigarette packs. He writes that studies by APPC respond to concerns raised by the federal appeals court in the District of Columbia in 2012 when it ruled against the warning-label images selected by the FDA. The pictorial labels were “unabashed attempts to evoke emotion (and perhaps embarrassment) and browbeat consumers into quitting,” the court wrote.

“Contrary to the ruling of the D.C. court, research by APPC has found that evoking emotion that is supportive of the risks detailed in the text may be essential to making the warning labels more memorable and effective,” Romer writes in “Smoking and Pictorial Warning Labels: What Does the Evidence Show?” He adds: “The evidence that has accumulated suggests that it is time for the FDA to push forward and to test new pictorial labels that will meet the standards set by the court.”

The issue brief is part of a new series being offered by the policy center that summarize research performed by APPC researchers and others in public policy areas of ongoing interest. The policy center also has released an updated issue brief on “Drug Prevention in Schools: Mandatory Random Drug Testing,” which surveys the available evidence on mandatory random drug testing (MRDT), including two relevant Supreme Court decisions. 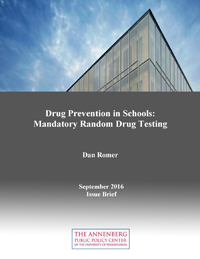 In this brief, Romer finds that “the evidence does not support the use of MRDT over other interventions. If schools are concerned about students going down a dysfunctional path of drug use, they should consider other approaches that have been found to be effective in preventing the initiation of regular drug use or in identifying students in need of treatment.”

The policy center this fall also published a white paper by APPC director Kathleen Hall Jamieson, former APPC visiting scholar Jo Holz, and APPC postdoctoral fellow Heather Akin on “Presidential Debates: What’s Behind the Numbers?” In the white paper, the authors analyze detailed Nielsen viewership data, a national survey, and a set of focus groups with debate viewers to consider how much and how many of the debates people actually watch, and why people do or do not watch the debates.