Oxford University Press has published the second edition of If Your Adolescent Has an Eating Disorder: An Essential Resource for Parents, the latest in a series of books for parents of teenagers with adolescent mental health conditions. 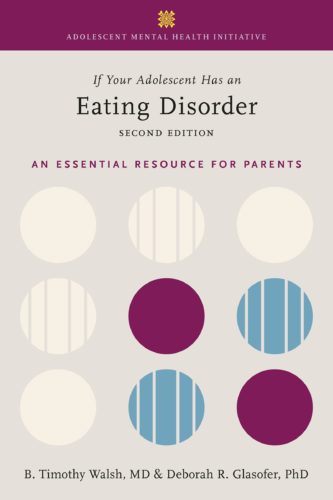 The onset of eating disorders usually occurs around the start of or soon after puberty. One study following about 7,000 adolescents between 1998 and 2001 found that 8% of the girls initiated purging behavior, and 12% of the girls and 5% of the boys began to binge eat.

The book, written by B. Timothy Walsh, M.D., and Deborah R. Glasofer, Ph.D., was developed for parents and other adults, such as teachers and guidance counselors, who are regularly in contact with adolescents. It combines the latest science, including the newest treatments and most up-to-date research findings on eating disorders, with the practical wisdom of parents who have been raising teens with eating disorders.

‘Eating Disorders’ part of a series

“If Your Adolescent Has an Eating Disorder” is part of a series developed by the Adolescent Mental Health Initiative, a project of the Annenberg Public Policy Center (APPC) and The Annenberg Foundation Trust at Sunnylands. The initiative, which was launched in 2003, convened seven expert commissions on a variety of adolescent mental health issues as well as positive youth development.

“Once again, a collaboration of experts supported by the Annenberg Public Policy Center and published by Oxford University Press has produced a clearly written, invaluable resource for parents whose teen and young adult children are suffering from a mental health disorder — in this case, eating disorders,” said Patrick E. Jamieson, Ph.D., series editor of the Adolescent Mental Health Initiative and director of APPC’s Annenberg Health and Risk Communication Institute.

The series includes four additional resource books for parents and eight for adolescents themselves, the latter including firsthand accounts of teenagers’ experiences with such disorders as anxiety, schizophrenia, and depression or bipolar disorder (see the full list below).

Angela Guarda, M.D., director of the eating disorders program at Johns Hopkins Hospital, calls If Your Adolescent Has an Eating Disorder “an excellent introductory guide for parents of teens and young adults … [that] provides pragmatic, factual information on eating disorders, how to access care for your child, and what to expect.”

Earlier books in the series can be downloaded for free as PDFs in English and Spanish on APPC’s website under the Adolescent Mental Health Initiative. Visit http://bit.ly/appc-amhi.

Other books for parents are:

Books for adolescents are: