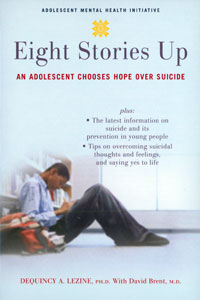 As a teenager, DeQuincy Lezine nearly ended his own life, believing it was the only way to escape the emotional pain that was overwhelming him. Instead, Lezine was able to find expert psychiatric care, and went on to found the first university campus-based chapter of the Suicide Prevention Action Network USA.

Now a researcher at the University of Rochester’s Center for the Study and Prevention of Suicide, Lezine has devoted his life to preventing suicide in adolescents, and he brings the wealth of his personal and professional experience to bear in Eight Stories Up. He starts by describing his deteriorating state of mind in college, using his own email archive to retell the episode that would nearly claim his life. He then offers hard-earned wisdom and practical advice to other young people who may be considering suicide. In straightforward, easy-to-understand language, and drawing on the psychiatric expertise of David Brent, MD, Lezine discusses the potential causes of suicide in adolescents, how to seek psychiatric treatment, and how to get the most out of professional help. He also surveys some of the therapies used to prevent suicide, how to talk to loved ones about suicidal thoughts, and how to stay healthy at home and at school. The result is both a remarkable memoir and a useful guide that will ease the isolation and hopelessness caused by thoughts of suicide, helping young people to overcome their troubles in a safe and healthy way.

Part of the Adolescent Mental Health Initiative series of books written specifically for teens and young adults, Eight Stories Up offers hope to young people who are at risk of suicide, extending a lifeline of support and guidance that can save their lives.