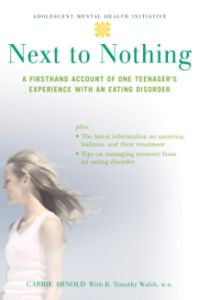 More than simple cases of dieting gone awry, eating disorders such as anorexia and bulimia are among the most fatal of mental illnesses, responsible for more deaths each year than any other psychiatric disorder. These illnesses afflict millions of young people, especially women, all over the world.
Carrie Arnold developed anorexia as an adolescent and nearly lost her life to the disease. In Next to Nothing, she tells the story of her descent into anorexia, how and why she fell victim to this mysterious illness, and how she was able to seek help and recover after years of therapy and hard work. Now an adult, Arnold uses her own experiences to offer practical advice and guidance to young adults who have recently been diagnosed with an eating disorder, or who are at risk for developing one. Drawing on the expertise of B. Timothy Walsh, M.D., one of America’s leading authorities on eating disorders, she reveals in easy-to-understand terms what is known and not known medically about anorexia and bulimia. The book covers such difficult topics as how to make sense of a diagnosis, the various psychotherapies available to those struggling with an eating disorder, psychiatric hospitalization, and how to talk about these illnesses to family and friends. The result is both a compelling memoir and a practical guide that will help to ease the isolation that an eating disorder can impose, showing young people how to manage and maintain their recovery on a daily basis.
Part of the Adolescent Mental Health Initiative series of books written specifically for teens and young adults, Next to Nothing will also be a valuable resource to the friends and family of those with eating disorders. It offers much-needed hope to young people, helping them to overcome these illnesses and lead productive and healthy lives.