FactCheck.org, a project of the Annenberg Public Policy Center, has released its list of the Whoppers of ’22, its annual review of the year’s worst political and viral deceptions. 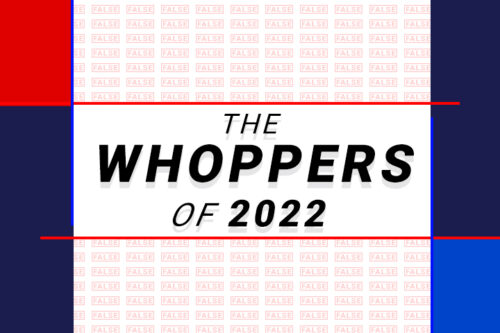 This year, FactCheck.org’s staff writes, political appeals to fear were as popular as ever. Republicans falsely alarmed Americans with claims that Democrats were authorizing the IRS to target middle-income taxpayers with tens of thousands of new IRS “agents,” while Democrats tried to scare voters by claiming Republicans had a plan to “end” Social Security and Medicare programs based on a proposal few Republicans supported.

The year’s whoppers also include:

FactCheck.org has spotlighted misinformation about Russia’s invasion of Ukraine, as well.

To read the full list with these and more, go to the Whoppers of ’22.