An analysis of suicide data published today concludes that seasonal fluctuations in suicide among adolescents and young adults ages 10 to 24 can explain the controversial findings that the adolescent suicide rate increased with the release of the Netflix series “13 Reasons Why.”

The research, by Dan Romer, Ph.D., research director of the Annenberg Public Policy Center (APPC) of the University of Pennsylvania, analyzes weekly U.S. suicide data for adolescents and young adults over the six-year period from 2013-18. Romer’s study finds that seasonal changes and other factors eliminate the apparent suicide contagion effect reported from the release of the first season of “13 Reasons Why.”

The seasonal pattern of adolescent suicide also appears to follow the school year, with a decline in the summer months when youths are not in school – an association that has not received much attention in scholarly literature.

The first season of “13 Reasons Why” was released on March 31, 2017. A much-publicized study by other researchers claimed to detect a significant increase in suicide among adolescent boys in April 2017, as well as in March, the month before the show’s release, while a second study found an effect for girls in April as well. Other studies found incremental increases in hospital admissions following the show’s release.

Romer’s new research, published in the journal Suicide and Life-Threatening Behavior, examines U.S. suicide data for the month before and after the show’s release, under the hypothesis that weekly data could provide a clearer explanation than monthly data of the apparent increase seen in March, before the series’ release. His analysis also looks at the alternative hypothesis that an increase in March and April 2017 could have reflected annual seasonal increases in the suicide rate.

“The suicide rate increases in the springtime for adolescents and young people, just as it does for everybody else,” Romer said. “The rise in the spring was coincidental with the release of ‘13 Reasons Why’ at the very end of March. When you control for that, the apparent increase goes away. The bottom line is we don’t have any evidence to show that ‘13 Reasons Why’ had an effect on suicide as far as the national rates are concerned.” 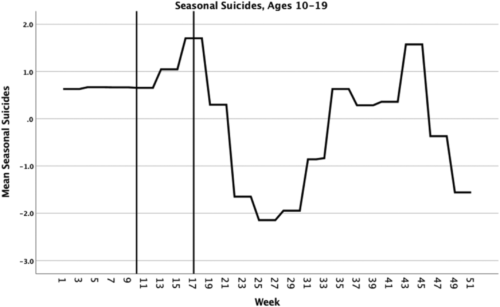 Weekly seasonal suicide rates from 2013 to 2018. The reference lines indicate the period before (March) and after (April) 13 Reasons Why was released in 2017. Data: National Center for Health Statistics. Graphic: Annenberg Public Policy Center. From “Seasonal suicide trends in adolescents in the US: Did they explain the apparent effects of the Netflix show 13 Reasons Why?” published in Suicide and Life-Threatening Behavior.

Concerns about the Netflix show ’13 Reasons Why’

“13 Reasons Why” featured a female high school student who died by suicide and left 13 tape recordings of experiences at her school that explained her decision to end her life. The final episode, which graphically portrayed her death, caused an uproar because it violated recommendations against displaying such portrayals. In the spirit of recommendations for the portrayal of suicide in media, Netflix eventually deleted the scene and included warnings at the beginning of each episode to give viewers advance notice of the potentially upsetting content and provide resources for those in need of counseling.

In a 2019 study, a group of researchers (Bridge et al.) claimed to find an increase in suicide among 10- to 17-year-olds in March and April of 2017, and over as long as a 10-month period, starting the month before Netflix released the series. This prompted Romer to conduct a reanalysis of the first season’s effects on suicide. Using a model that took into consideration the rise in suicide that has occurred in recent years in adolescents and other statistical factors, Romer found no effect for girls but found an effect in boys. That apparent effect was difficult to explain because it occurred a month before the show was released. The Bridge study noted that a promotional trailer for the series began airing on March 1, 2017, and attributed the rise in suicide in that month to the “promotional period” for the series.

“We were skeptical of the finding that the show produced a sustained effect on suicide,” said Romer, whose 2020 reanalysis was published in PLOS ONE. “Finding an effect for boys was unexpected if the portrayal by a female protagonist produced contagion. And seeing an effect before the show even aired should have raised concerns.”

Another study by Romer and colleagues with a panel of young people ages 18 to 29 both before and shortly after the second season of “13 Reasons Why” provided more in-depth analysis of the show’s effects. This analysis found that those who started to watch the second season but discontinued watching it were especially likely to experience an increase in suicidal risk. However, those who watched the entire second season experienced decreases in suicide risk and greater willingness to help others in distress, compared with those who either didn’t watch the show or who discontinued watching. These findings suggested that those who were most at risk of an adverse reaction – the most vulnerable – may not even have viewed the final episode of the first season.

Other researchers have found positive effects of the show by increasing perceived understanding of the risks of suicide and sympathy for those at risk of suicide. A recent study by researchers at UCLA found that of the adolescents who were asked to watch the third season of “13 Reasons Why,” 88% went online to talk about mental health and 92% sought out information on mental health topics. According to Yalda T. Uhls, Ph.D., the senior researcher on the UCLA study, “Our study adds to the increasing evidence that a popular entertainment show that deals with mental health issues can be an effective intervention, especially if combined with high-quality resources alongside the storyline.”

Romer notes that the seasonal pattern of recent adolescent suicides “appeared to follow the school year with a decline during summer months,” consistent with a prior, unrelated study of data in 18 states for the period 2000-2014. The findings, Romer says, “suggest that schooling may be a risk factor for suicide,” though he adds that it’s “difficult to draw causal conclusions from population-level trends in schooling and suicide” given that “schooling as an experience is too varied to be a risk factor for suicide.”

The seasonal pattern observed for adolescents was also apparent for young men ages 19 to 24, suggestive of the same seasonal pattern of reduced suicide during the summer. The findings highlight how adolescents and college-age youth are at increased risk of suicide during the school year, a pattern not seen in adults. Indeed, young people ages 25 to 29 did not exhibit the summer decline, but instead displayed a summer increase, which is the pattern typically seen in older adults.

“Seasonal suicide trends in adolescents in the US: Did they explain the apparent effect of the Netflix show 13 Reasons Why?’ was published online on December 19, 2022, in Suicide and Life-Threatening Behavior. DOI: 10.1111/sltb.12934.

The author thanks Robert Anderson of the National Center for Health Statistics (NCHS) for assistance in acquiring and interpreting the data for this study and to Shukai Cheng of Children’s Hospital of Philadelphia for assistance in extracting the data from NCHS. The findings and conclusions in this paper are those of the author and do not necessarily represent the views of the Research Data Center, the National Center for Health Statistics, or the Centers for Disease Control and Prevention.