PHILADELPHIA – The Spanish-language telenovela “Juana la Virgen” was remade into “Jane the Virgin” for American audiences in 2014, following a trail pioneered nearly a decade earlier with the television show “Ugly Betty.”

Researchers at the Annenberg Public Policy Center (APPC) of the University of Pennsylvania wondered how the CW Network show “Jane the Virgin” differed from the original. Given the increasing depiction of sex, violence, and alcohol use in American media over recent decades – which the researchers dubbed a “culture of corruption” – how did the U.S. remake differ from the Venezuelan telenovela in portraying risk and healthy behaviors?

A new pilot study from the Annenberg Public Policy Center analyzing 10 episodes each from the original and the remake finds that the adaptation “Jane the Virgin” depicts a greater amount of risk and less healthy behavior than the original. 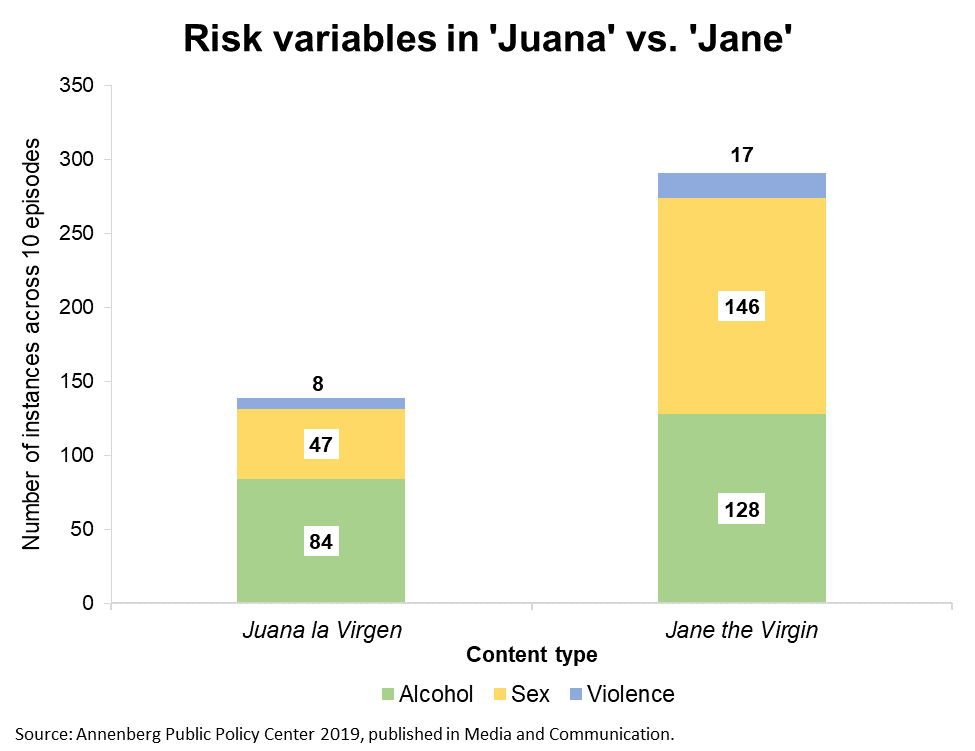 The study, published this week in Media and Communication, compares the adaptation “Jane the Virgin” with the original “Juana la Virgen” and finds that the American remake has:

But the study also finds that the remake has more pro-health messaging than the original.

“There are higher levels of problematic content in ‘Jane the Virgin’ when compared with its original source program, ‘Juana la Virgen,’ ” said APPC research project manager Darien Perez Ryan, the lead author. “This increase in risk can be attributed in large part to deliberate character and narrative changes that happened during the process of adaptation.”

Her study co-author, Patrick E. Jamieson, who directs APPC’s Adolescent Health and Risk Communication Institute, said the findings show that the content of the original TV show was adapted to fit U.S. media trends. “This study finds initial support for our culture of corruption hypothesis,” he said.

How the study was conducted

For the pilot study, researchers conducted a content analysis of 10 episodes from the 2002 airing of “Juana” and 10 from the first season of “Jane” (2014-15), including the first and last episodes and eight randomly chosen from the rest. Four trained coders watched the 45-minute episodes, minus commercials, and tracked risk and “culture of health” behaviors. Those included risk behaviors such as alcohol, sexual content, and violence, and culture of health variables such as exercise, education, and pro-health messaging.

The research was done as part of APPC’s CHAMPION project – Culture of Health and Media Portrayal in Our Nation. The project examines risk and health behaviors in mass media, and is supported by a grant from the Robert Wood Johnson Foundation.

One area where ‘Jane the Virgin’ shined

The researchers found a statistically significant difference in the amount of sexual content in “Jane the Virgin” than “Juana la Virgen,” and a marginally significant increase in violence. “Jane” also had significantly more unhealthy food content – particularly fats/oils/sweets and takeout food. Where “Juana” had 35 instances of characters engaged in exercise, “Jane” had none. 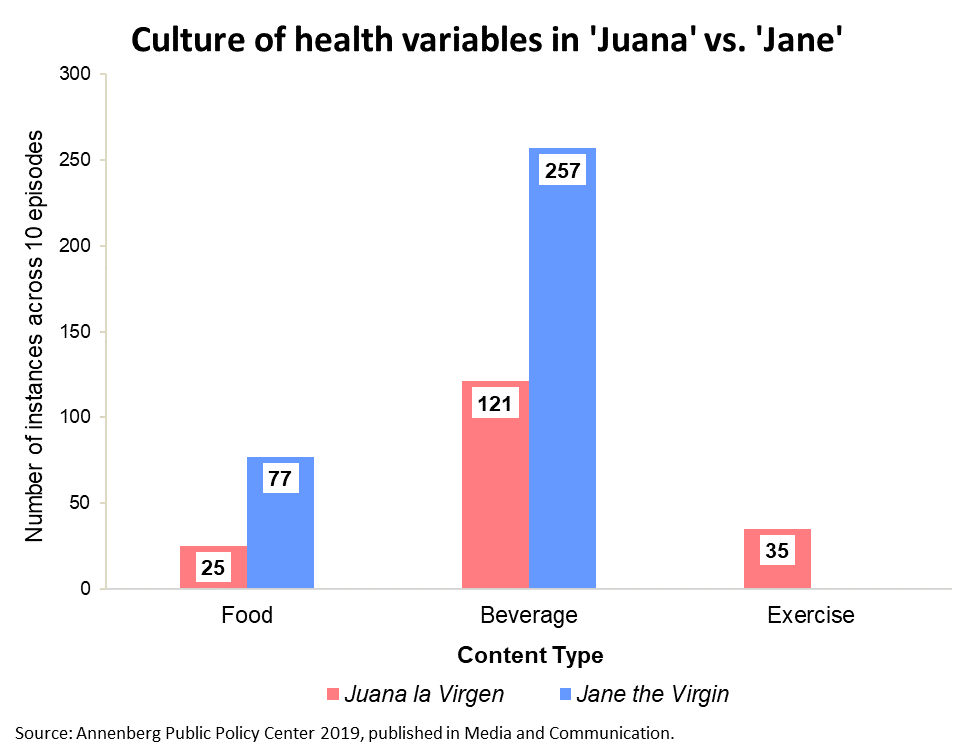 In only one area did “Jane the Virgin” improve on the original: pro-health messaging. It was present in 25 five-minute segments of “Jane” but only in 10 segments of “Juana.”

This can be attributed in part to narrative choices regarding the protagonist’s pregnancy. In the telenovela, Juana is a 17-year-old high school student who tries to hide her pregnancy from family and friends and flees home to avoid the stigma associated with teen pregnancy. In the U.S. adaptation, however, Jane is a 24-year-old college student who learns she is pregnant when her mother is present and who actively seeks the support of her family and the child’s father. She regularly attends doctor appointments and follows prenatal advice – examples that provide an opportunity for pro-health messages.

Character and setting and increases in risk

Other changes to character and setting also account for differences between the shows. Juana is the star of her high school soccer team and her mother is a phys ed teacher, so exercise is seen on-screen. Jane works part-time as a waitress at the Marbella Hotel, which hosts lavish parties, enabling scenes with alcohol and unhealthy food.

Jane’s boyfriend in season one is a gun-carrying Miami police detective who is investigating a drug ring and murders at the Marbella, a narrative switch that permits higher levels of sexual content and violence. In contrast, the study notes, the original Juana abstains from romantic entanglements to keep from being distracted from her goal of getting a scholarship to study photography in the United States.

“You might say, Jane is of age, so she can handle alcohol – so why is that a problem?” Ryan said. “It’s not a problem for the character on screen. It’s a problem for the adolescent it’s being modeled to. We know that adolescents are influenced by behavior on-screen, like drinking. We also know that adolescents who watch more sexual content on TV are more likely to progress to participation in non-coital sexual activities and have sex earlier. It’s particularly important given that sex is something that’s heavily featured in ‘Jane the Virgin.’ ”

Similarly, violence and gun portrayal in “Jane the Virgin” may promote acceptance of violence, the authors said.

Ryan added, “There are changes producers can make when they’re making these sorts of editorial and narrative decisions to increase the amount of positive content on-screen and decrease problematic content.”

Hispanic audiences and why this matters

“The CW Network has aimed its programming at younger audiences, and in Jane it has one of the only young female Hispanic protagonists on television,” Ryan said. “There’s an added risk for young female Hispanics who are more likely to see themselves in her, identify with her, and potentially imitate what she models on-screen.”

Jamieson added that by amplifying risks and diminishing healthy behaviors, the show exemplifies a problematic media diet for other viewers as well, including some recent immigrants who are becoming acculturated to the United States. “As they’re consuming more Americanized media and viewing both English- and Spanish-language TV programming as in ‘Juana’ and ‘Jane,’ this study suggests that what they’re being shown is getting worse,” he said.

Jamieson noted that future research would examine other types of television programming that is being adapted from other cultures for U.S. audiences.

The research was supported by the Robert Wood Johnson Foundation’s Culture of Health initiative. “Risk and Culture of Health Portrayal in a U.S. Cross-Cultural TV Adaptation, a Pilot Study” is published in Media and Communication.