The Rendell Center for Civics and Civic Engagement, in partnership with the Annenberg Public Policy Center, is hosting a two-session webinar for teachers on the Supreme Court and the state of judicial independence in the United States. 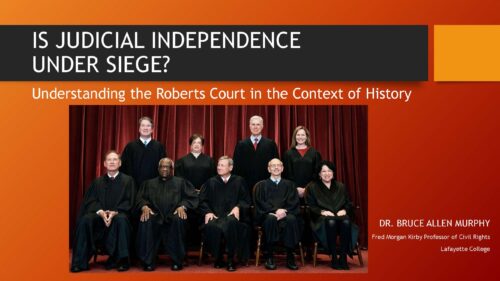 The series “Is Judicial Independence Under Siege: Understanding the Roberts Court in the 2021-22 Term” examines the major cases and rulings during the court’s 2021-22 term, along with the arguments and the factors that may have affected these decisions. Participants in the sessions will study constitutional and Supreme Court case law, and explore the shifting voting alliances and decision-making approaches of the current court. Participants also will gain a better understanding of judicial independence, the relationship between the Supreme Court and the other branches of government, and the overall shifting legal and political trends in the United States as compared to previous historical eras. Finally, the webinar series will explore the direction in which the Supreme Court may be headed in future decisions.

The first session, on June 29, was led by Bruce Allen Murphy, a judicial biographer and scholar of American constitutional law who is the Fred Morgan Kirby Professor of Civil Rights at Lafayette College. In this session, Murphy laid out different models for thinking about the justices’ approaches to the court, looked at Martin-Quinn scores, a statistical way of placing the justices on an ideological scale, and considered historical “regimes” of the Supreme Court.

The second session, also led by Murphy, will be on August 10 and will examine the decisions of the court and the precedents that may have been set. This session will also look at the cases the Supreme Court has accepted for review in the fall term, and how the addition of Associate Justice Ketanji Brown Jackson could influence the court’s approach in these cases.

The Rendell Center, established in 2014 by former Pennsylvania Gov. Edward G. Rendell and federal court Judge Marjorie O. Rendell, promotes civics education among K-8th grade students and provides professional development for teachers with a focus on the Constitution, First Amendment, and the Bill of Rights.