The Rendell Center for Civics and Civic Engagement has launched a series of podcasts titled “Judges on Judging,” in which jurists discuss current cases and legal issues.

Judge Marjorie O. Rendell, chairman of the Rendell Center and a senior judge on the U.S. Court of Appeals for the Third Circuit, moderates the podcasts, which are produced through a partnership with the Annenberg Public Policy Center. 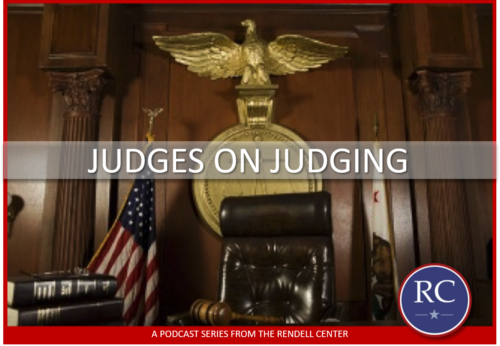 The Rendell Center offers educational materials and lesson plans on civics for elementary school classes. These podcasts were envisioned as an extension of a symposium on a fair and impartial judiciary the center cosponsored in the fall of 2019.

The first podcast features Rendell and U.S. District Court Judge Mitchell S. Goldberg discussing the case of former Trump national security advisor Michael Flynn. Flynn twice pleaded guilty to a charge of lying to the FBI in interviews about his contacts with a Russian diplomat in late 2016, during the presidential transition. Nevertheless, in May 2020 the Justice Department moved to dismiss the case against Flynn and a federal appeals court panel subsequently ruled 2-1 that it should be dismissed. The trial judge, Emmet Sullivan of the D.C. District Court, has asked the full appeals court to review that ruling.

“I was reading so much misinformation about the Michael Flynn case,” Rendell said. “There are rules and principles that govern what we do. But there was so much rush to judgment from both a left and a right perspective that I thought to myself, we need to educate the public about what this is all about. I just thought it was a moment for education.”

Rendell said she and her fellow judges are seeking to demystify the law and explain how judges think. “Rule 42, Rule 48, mandamus … what are these magic words?” she said. “I am thinking of our audience as teachers. That helps me and my colleagues try to keep it educational.”

In the second podcast, on how the COVID-19 pandemic is affecting the courts, Rendell said, “I’m hoping to educate the next generation of citizens by talking about what judges do, how they decide cases, the laws that are impacting what happens in our courts today [and] the situations impacting our courts.”

The third podcast looks at the balance between First Amendment rights and laws prohibiting discrimination — first in Masterpiece Cakeshop v. Colorado Civil Rights Commission, a case the U.S Supreme Court decided in 2018, and then in Fulton v. City of Philadelphia, which will be argued before the Supreme Court in its next term. Rendell and her colleague on the podcast, Judge Thomas Ambro, were on the Third Circuit Appeals Court panel that ruled in Fulton, which involves a Philadelphia Catholic adoption agency that would not place foster children with same-sex couples on the grounds of religious principle. The city of Philadelphia then stopped placing children with the agency because it did not act in accordance with the city’s nondiscrimination policy.

The Catholic agency sued, asking the court to order the city to renew its contract. The district court denied the agency’s request and the appeals court affirmed that ruling.

To listen, click on the links below, or go to the Rendell Center’s page on its podcast series.