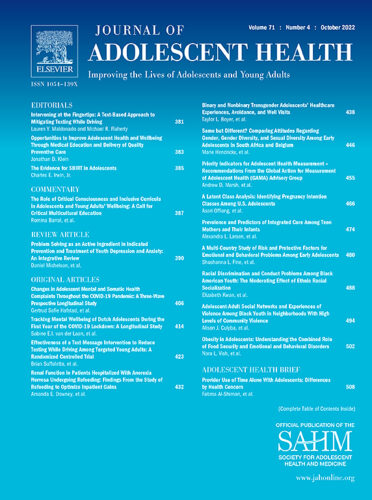 The behavioral disinhibition model (BDM) posits that a liability toward impulsivity evident by early adolescence underlies the coemergence of antisocial behavior and alcohol use (i.e., problem behaviors) in early-adolescence to mid-adolescence, but that the subsequent development of these problem behaviors (rather than impulsivity itself) predicts the emergence of antisocial personality disorder (APD) and alcohol use disorder (AUD) in late adolescence. The present study was designed to test these predictions of the BDM from early to late adolescence.

We used five-year longitudinal self-report data from the Philadelphia Trajectory Study that was collected from 2006–2012. Mediational analyses were performed using the Random Intercept Cross-lagged Panel Model, which enables the detection of within-person predictions of changes in problem behaviors during adolescence. The sample was ethnically and socioeconomically diverse, including 364 urban US community youth (at baseline: Mage = 13.51(.95); 49.1% female).

Consistent with the BDM, mediational analyses revealed that changes in early adolescent impulsivity predicted late adolescent APD and AUD criteria, mediated by changes in mid-adolescent alcohol use and conduct problems.

Click here to read the full article from the Journal of Adolescent Health.