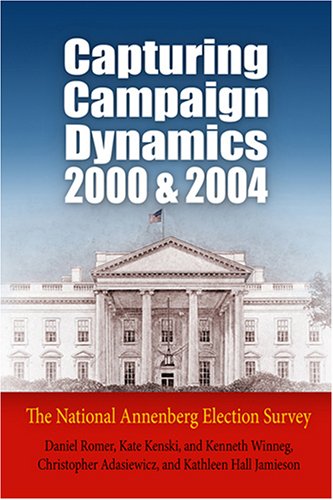 The presidential elections of 2000 and 2004 were two of the most contested and dramatic in our nation’s history. During the election seasons of 2000 and 2004, the Annenberg Public Policy Center conducted the largest studies ever undertaken of the American electorate—the National Annenberg Election Survey (NAES). Capturing Campaign Dynamics, 2000 & 2004 provides the data from these two surveys to the general public as well as useful tools for analyzing and interpreting the findings.

Featuring rolling cross-sectional analysis, this book walks researchers through different strategies for using this type of survey research to understand campaign dynamics. An important feature of the volume is its explanation of the use of time series analysis to study the dynamic effects of political events as they unfold during presidential elections. The application of this methodology will uncover new insights into the time-dependent processes that unfold during election campaigns in ways that have not been possible before NAES. The book includes a CD-ROM of the NAES codebooks and data, featuring more than 200,000 interviews with adults living in the United States. The data contained on the NAES CD-ROM are in both SPSS format and tab-delimited format for use with other statistical software.

Capturing Campaign Dynamics, 2000 & 2004 is ideal for courses in survey research methods in political science, communications studies, and analysis of public opinion. It will also be of great interest to scholars and professionals, such as pollsters and political consultants.