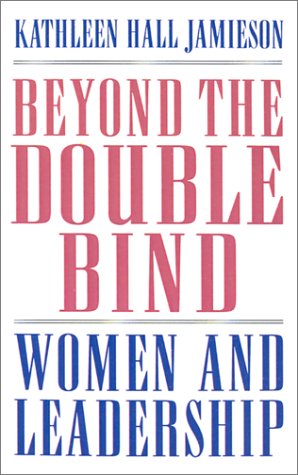 “I can remember,” says lawyer Flo Kennedy, “going to court in pants and the judge remarking that I wasn’t properly dressed, that the next time I came to court I should be dressed like a lawyer.” It was a moment painfully familiar to countless women: a demand that she conform to a stereotype of feminine dress and behavior — which would also mark her as an intruder, rising above her assigned station (as the saying goes, she dared to “wear the pants” in the courtroom). Kennedy took one look at the judge’s robe, essentially “a long black dress gathered at the yoke,” and said, “Judge, if you won’t talk about what I’m wearing, I won’t talk about what you’re wearing.”

In Beyond the Double Bind, Kathleen Hall Jamieson takes her cue from Kennedy’s comeback to argue that the catch-22 that often blocks women from success can be overcome. Sparking her narrative with potent accounts of the many ways women have beaten the double bind that would seem to damn them no matter what they choose to do, Jamieson provides a rousing and emphatic denouncement of victim feminism and the acceptance of inevitable failure. As she explores society’s interlaced traps and restrictions, she draws on hundreds of interviews with women from all walks of life to show the ways they cut through them. Kennedy, for example, faced the bind that insists that women cannot be both feminine and competent–and then demands that they be feminine first; she undermined that trap with wry wit. Ruth Bader Ginsberg attacked the same quandary head-on: when she heard that her law-school nickname was “bitch,” she replied, “Better bitch than mouse.” Jamieson explores the full range of such double binds (the uterus-brain bind, for example–“you can’t conceive children and ideas at the same time”; or the assertion, “You are too special to be equal”), offering a roadmap for moving past these barricades to advancement. Unlike other breakthrough feminist writers, she finds grounds for optimism in areas ranging from slow improvements in women’s earnings to newly effective legal remedies, from growing social awareness to the determination and skill of individual women who are fighting the double bind.

Jamieson is a widely sought-after authority on politics and communications; this book marks a dramatic new departure for her, one certain to win widespread attention. With intensive research and incisive analysis, she provides a landmark account of the binds that ensnare women’s lives–and the ways they can overcome them.

Kathleen Hall Jamieson, PhD
Purchase a copy of the book: