A new publication from the Annenberg Science Media Monitor, a project of the Annenberg Public Policy Center, analyzes how the news media have presented different narratives about science, from discovery to retractions, from identifying problems in scientific research to the “problem explored” — that is, how science seeks solutions or is self-correcting.

From April 2012 to April 2019, coders on the media monitor project identified 135 print and online pieces dealing with crisis and self-correction. Those pieces were found in the LexisNexis and Factiva databases in a search for headline terms such as “crisis,” “broken,” “failure,” “fraud,” “peer review,” “problem,” “replication,” “reproducibility,” “retraction,” “scandal” or “self-correction” with the word “science.” Of those pieces, 46% cited literature relevant to the claim that science is broken or in crisis, 31% were written by a scientist, and 42% mentioned solutions to problems or evidence of self-correction – what the media monitor labels problem explored.

Of those 135 articles, a subset of 58 mentioned solutions to problems or evidence of self-corrective action.

The media monitor brochure, updated from a version published earlier this year, also looks at the “discovery narrative” as used by four major news outlets in reporting on science. And the monitor examines three prominent examples of retracted work, by Oona Lönnstedt and Peter Eklöv on the consumption of plastic by fish; Brian Wansink on human eating behavior; and Piero Anversa on cardiac stem cell therapy.

The updated Annenberg Science Media Monitor brochure was disseminated in July 2020 to registrants of the Association for Education in Journalism and Mass Communication’s 103rd annual conference, conducted virtually on August 6-9, 2020. The earlier edition was distributed in February 2020 at the American Association for the Advancement of Science annual meeting in Seattle. 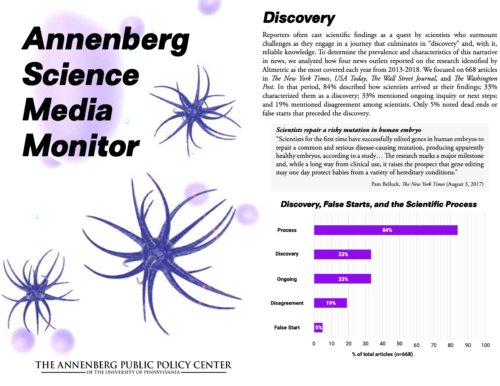 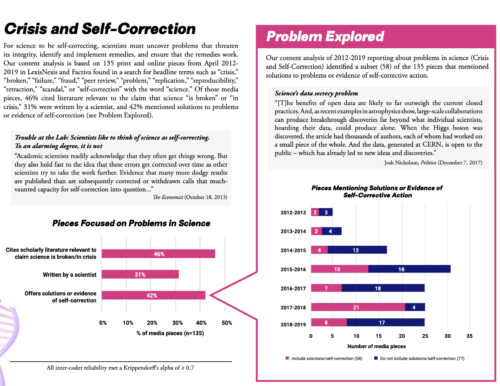 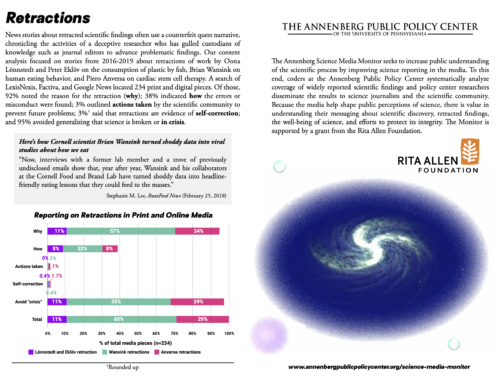 The Science Media Monitor is supported by a grant from the Rita Allen Foundation.

Other reports from the Annenberg Science Media Monitor include:

The reports are available at www.annenbergpublicpolicycenter.org/science-media-monitor/.