It was on “The Howdy Doody Show” in 1947 that Buffalo Bob first asked children, “Say, kids, what time is it?” What time? It was, as Jo Holz writes in a new book, America’s time as a superpower with a booming post-war economy. But more specifically for the children in earshot of the question, it was their time, time to watch TV, and they knew exactly what to shout in reply: “It’s Howdy Doody time!” 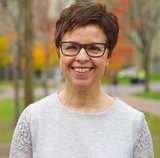 In the years since, children’s television has emerged in a wide array of formats: puppet shows, variety shows, fast-paced educational shows, outer space and science fiction shows, cartoons, anthologies, scripted dramas and more. In her book “Kids’ TV Grows Up: The Path from Howdy Doody to SpongeBob,” Holz takes a sociocultural look at the evolution of children’s television over seven decades.

“So what has driven the evolution of children’s television?” writes Holz, a former professional-in-residence at the Annenberg Public Policy Center (APPC). “This book suggests that there are patterns of change that mirror, not without distortion but in important ways, how our country, our society, and our culture have changed during that time. Perhaps most importantly, the changing content of these shows reflects fundamental shifts in the ways we think about children and childhood itself.”

It’s a story that begins in 1947, with the March 11 debut of “Movies for Small Fry” on the DuMont Television Network. At first, the program aired theatrical cartoons and other movies for children with a radio host providing an off-screen voice-over.

That swiftly grew into the “Small Fry Club,” offering membership cards and contests for viewers, and turned from a weekly program into a five evenings-a-week staple “for those families who were lucky enough to have a TV set at home,” Holz writes.

In the 1950s, Holz notes, most children’s shows aired in the late afternoon or early evening. But in the ’60s, stations began replacing kids’ programming in the afternoon with shows for stay-at-home moms, for which they could charge higher ad rates, and shifted their children’s shows to Saturday morning. From 1958 to 1968, the portion of network programming for kids that ran on Saturday mornings grew from about 25 percent to more than 50 percent.

In an interview in 2015, Holz said her memories of programs she watched as a child growing up in Boston, including “The Howdy Doody Show,” “Ding Dong School” and “The Pinky Lee Show,” inspired her project. “I am an immigrant; I was born in Germany,” she said. “I came here when I was four years old and television played a huge role in my family in learning American culture and, really, socialization, language. One of the first things we got – and we were pretty poor when we first got here – was this big, honkin’ television. The television was on 24/7 in my household.”

Holz began work on the book during her two years at APPC, starting in July 2014. Holz, a graduate of the Annenberg School for Communication, was formerly head of research at Children’s Television Workshop (now Sesame Workshop) and has worked in market research for Nielsen, Oxygen Media and NBC.