An analysis by the Annenberg Public Policy Center conducted for the Center for Responsive Politics found that from December 1, 2011 through June 1, 2012, 85% of the dollars spent on presidential ads by four top-spending third-party groups known as 501(c)(4)s were spent on ads containing at least one claim ruled deceptive by fact-checkers at FactCheck.org, PolitiFact.com, the Fact Checker at the Washington Post or the Associated Press.

Under IRS rules, a 501(c)(4) operates “only to promote social welfare to benefit the community.” As long as it is organized primarily to promote the community’s general welfare, it may lobby for legislation and participate in political campaigns.

These groups don’t have to disclose their donors. 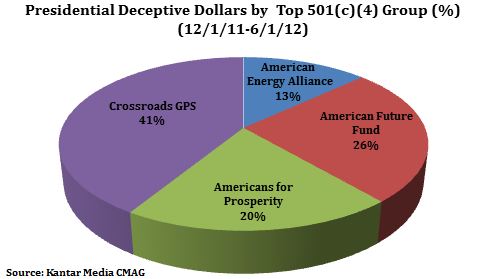 As of June 1st, no Democratic leaning 501(c)(4) had paid for advertising in the presidential race.

The claims2 ruled deceptive by the fact-checkers included:

To stop 501(c)(4) groups and other third-party groups from polluting the airwaves with misleading ads, go to FlackCheck.org to email your local stations urging them to insist on the accuracy of the third-party ads they choose to air.

To see other deceptive claims by these 501(c)(4) groups as well as evaluations of them by the major fact-checking groups, go to the FlackCheck.org Deception Log.

A study released by APPC in April found that from the Iowa Caucus through the Wisconsin primary 56.7 percent of the dollars spent by the four top-spending third-party groups (three super PACs and AFSCME) on presidential campaign ads was spent on ads containing at least one deception.

“Across the history of campaign communication, third-party ads have been both more attack-driven and more deceptive than candidate-sponsored ones,” noted APPC Director Kathleen Hall Jamieson at the Center for Responsive Politics’ “Shadow Money” seminar at the National Press Club today. “Unsurprisingly, our 2012 APPC studies of third-party deception confirm that as the level of donor disclosure drops, the level of duplicity rises. This year, presidential super PAC ads are more deceptive than those sponsored by presidential candidates and C4 presidential ads more duplicitous than super PAC ones.”

Download the full press release as a PDF file.