Drawing on spending estimates from Kantar Media CMAG and the fact checking of FactCheck.org, the Annenberg Public Policy Center has created a dollars in deception measure (DDs) calculating dollars spent on televised presidential third party ads by the groups calling themselves “The Red White and Blue Fund,” “Winning Our Future,” “Restore Our Future,” and the American Federation of State, County and Municipal Employees (AFSCME).

From Iowa through Wisconsin, 23.3 million (56.7%) of the 41.1 million dollars were spent on 19 ads containing deceptive or misleading claims.

“Restore Our Future” outspent the pro-Gingrich and pro-Santorum super PACs by 20 to 1. 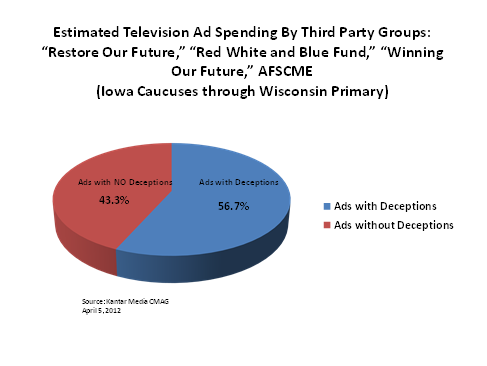 “Restore Our Future” spent DDs against Gingrich and Santorum on such deceptions as: