The three former Homeland Security Secretaries renewed their call for Congress to streamline and consolidate oversight of the Department of Homeland Security, deeming it “a matter of critical importance to national security on which there is broad bipartisan agreement.”

Former DHS Secretaries Tom Ridge, Michael Chertoff and Janet Napolitano said the consolidation of the department “remains the only major recommendation of the 9/11 Commission that ten years later has not been acted upon.” The three former department heads issued a similar call before the current Congress took office in early 2015.

The three submitted a letter to Rep. Pete Sessions (R., Texas), chairman of the House Rules Committee, in advance of hearings for reorganization of the 115th Congress, which assembles in January. In the letter, the three former top Homeland Security leaders cited the work of the Sunnylands-Aspen Institute Task Force, which issued a report on Sept. 11, 2013, the 12th anniversary of 9/11, advising Congress to “reform and strengthen” its oversight of Homeland Security.

In its report the task force, which included 9/11 Commission chair Tom Kean and vice-chair Lee Hamilton, said Congress should significantly reduce the number of committees with jurisdiction over homeland security and consolidate primary oversight under one committee in the House and one in the Senate. The task force said that DHS oversight should resemble that governing other critical departments, such as Defense and Justice.

In the 112th Congress, DHS answered to 92 Congressional committees and 27 additional caucuses, commissions and groups, three times the number overseeing Defense. (For a graphic display of the oversight of DHS, as published in a New York Times ad, click here.) 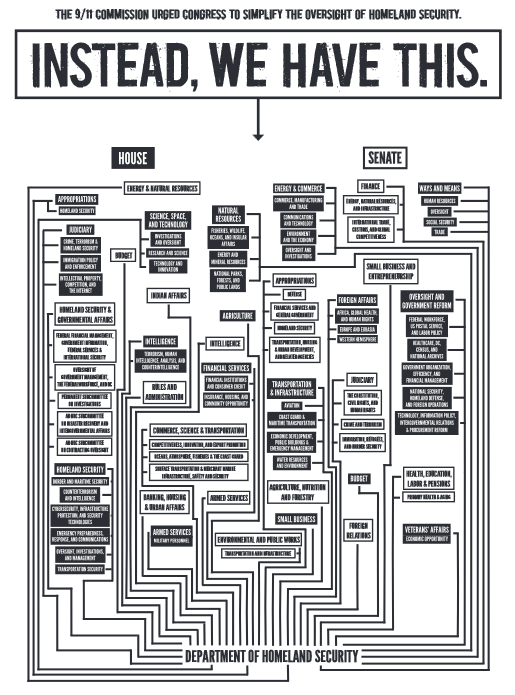 “We recognize that this proposal vests less jurisdiction in the House Homeland Security Committee than past versions we have supported, but believe that this change is achievable, and represents real progress toward resolving a longstanding and thorny challenge,” the three leaders said.

The Sept. 20 letter was released by the Annenberg Public Policy Center (APPC) and the Aspen Institute Justice and Society Program. In the spring of 2013, APPC and the Aspen program organized the Sunnylands-Aspen Institute Task Force, which met at the Annenberg Retreat at Sunnylands. Along with Kean and Hamilton, the task force included former DHS Secretary Chertoff and former U.S. Coast Guard commandant Thad Allen. The retreat was organized by APPC director Kathleen Hall Jamieson, who is program director at Sunnylands, and Meryl Justin Chertoff, executive director of the Aspen Institute’s Justice and Society Program.

To see the names of more than 60 experts who supported streamlining oversight in a statement published in the Wall Street Journal, click here. To watch the video “Homeland Confusion” on this issue, click here. And click here to read a New York Times op-ed by Kean and Hamilton on why “our country is still not as safe as it could and should be.”