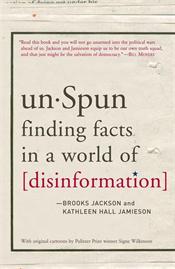 Brooks Jackson and Kathleen Hall Jamieson, co-authors of UnSpun: Finding Facts in a World of Disinformation, described their findings in a May 15th interview on WHYY-FM’s Radio Times with Marty Moss-Coane. The book, published last month by Random House, has been described as “the secret decoder ring for the 21st-century world of disinformation.”

Jackson, who directs APPC’s FactCheck.org website, and Jamieson, APPC’s director, teamed up with Pulitzer Prize-winning cartoonist Signe Wilkinson of the Philadelphia Daily News to detail how spin has worked successfully in selling everything from war and taxes to emu oil and “tall” coffees.

During the Radio Times interview, Jackson and Jamieson criticized the news media for failing to serve as neutral arbiters of accuracy, to help the American public cut through the deception. “The role of the media is to be a custodian of the facts,” said Jamieson. Instead, said Jackson, the media often praises candidates for their success at spinning the truth, much like they’d praise a pitcher for throwing knuckleballs past a batter.

Said Jackson: “What we’ve tried to do with this book is show how often we voters and consumers get spun without even knowing it, and why. We share with our readers some of the tools we use everyday at FactCheck.org to de-bunk the malarkey and find reliable information quickly using the internet.”

In advance of the book’s release veteran journalist Bill Moyers wrote: “Read this book and you will not go unarmed into the political wars ahead of us. Jackson and Jamieson equip us to be our own truth squad, and that just might be the salvation of democracy.”

Order the book from Random House