The question of how Donald Trump won the 2016 election looms over his presidency. Were the 78,000 voters who gave him an Electoral College victory affected by the Russian trolls and hackers? Trump has denied it, and so, too, has Vladimir Putin. Others cast the answer as unknowable.

In the new book “Cyberwar: How Russian Hackers and Trolls Helped Elect a President – What We Don’t, Can’t, and Do Know,” from Oxford University Press, Kathleen Hall Jamieson concludes it is likely that Russian help was crucial to Trump’s win.

Jamieson, director of the Annenberg Public Policy Center of the University of Pennsylvania and professor of communication at Penn’s Annenberg School for Communication, explains in “Cyberwar” the multiple ways in which the Russian interference could have altered the election outcome. Drawing on work in which she and her colleagues isolated significant communication effects in the 2000 and 2008 presidential campaigns, Jamieson marshals the troll posts, unique polling data, analyses of how the press used the hacked content, and a synthesis of a half century of media effects research to argue that, although not certain, it is likely that the Russians helped elect the 45th president of the United States.

An article in The New Yorker by reporter Jane Mayer, “How Russia Helped Swing the Election for Trump,” said of “Cyberwar”: “A meticulous analysis of online activity during the 2016 campaign makes a powerful case that targeted cyberattacks by hackers and trolls were decisive.” The Verge wrote: “What makes Jamieson’s take notable is her scrupulously data-driven approach to answering a question that many people have dismissed as impossible.” 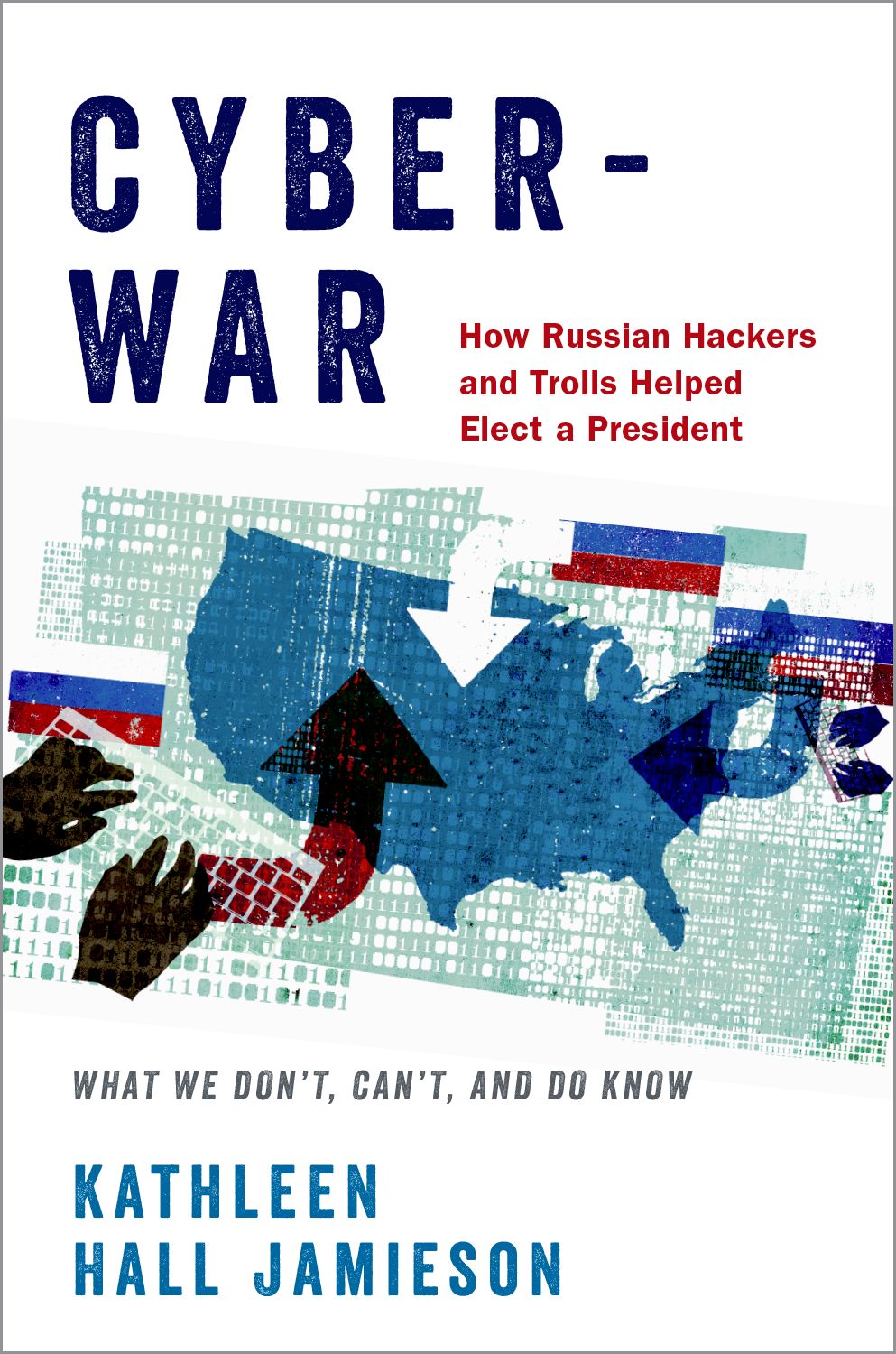 Kirkus Reviews wrote: “Somber but necessary reading for those interested in the democratic process and its enemies.” CNN “New Day” anchor John Berman said, “I commend people to go read it because it’s fascinating.”

Speaking at The Atlantic Festival, in Washington, D.C., on October 2, 2018, former Democratic presidential nominee Hillary Clinton praised the book’s conclusions. “There’s a new book coming out… by the political science professor Kathleen Hall Jamieson, and in it she goes – boy, as deep as you can get – into the two different forms of the attack, basically following the Mueller indictments, the social media attacks and the hacking attacks. And she concludes that the hacking attacks had a demonstrable impact on the outcome. That’s not me, that’s her.”

Pre-publication praise for “Cyberwar” came from PBS NewsHour anchor and managing editor Judy Woodruff, who called it “must reading for everyone who cares about the future of the American electoral system.” Advance praise came from Andrea Mitchell, chief foreign affairs correspondent for NBC News, who said: “Her masterful study provides a compelling answer to the question of whether Russia likely helped elect an American President.” Also offering a pre-publication assessment was Robert Jervis, a professor of international politics at Columbia University, who said: “It is hard to imagine a better application of careful scholarship to a central question for our country and deserves a wide readership.”

In an editors’ roundup, The National Review was critical, summarizing the argument as “evil online Russkies pushed the 2016 race” toward Trump, while adding that “[f]ears of a deluded electorate go back to the Constitutional Convention.” Also dismissive was the Russian news outlet RT, formerly Russia Today, which took issue with the book’s conclusions, charging that what Jamieson “doesn’t know is whether Russian hackers actually did swing an election, but on the balance of Russophobia, she’s decided that they did.”

Cyberwar: How Russian Hackers and Trolls Helped Elect a President

Read more about “Cyberwar” at www.cyberwar2016book.com and at Oxford University Press.