Recent political events and the COVID-19 pandemic create the impression that conspiracy theories are spreading more quickly and widely than ever. Fear and uncertainty predispose people to believe conspiratorial narratives of danger and hidden plots, fueled by – and, in turn, fueling – media coverage. But what exactly is a conspiracy belief, how is one created and spread, and how do all these complex forces interact? What is the psychology behind it and how do political and social factors contribute to this dynamic?

Creating Conspiracy Beliefs: How Our Thoughts Are Shaped (Cambridge University Press, 2021) draws on survey, experimental, and social media data to test a theory of psychological and sociopolitical influences on conspiracy beliefs. The book is authored by Dolores Albarracín, Man-pui Sally Chan, and Kathleen Hall Jamieson of the University of Pennsylvania and Julia Albarracín of Western Illinois University. 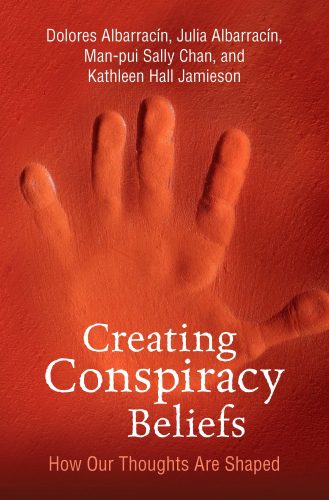 The scholars apply insights from psychology, political science, communication, and information sciences to offer an overview of conspiracy beliefs and a practical way to frame and understand these theories. They examine the role of anxiety and the fear-inducing content of messages that can predispose people to believe in conspiracies, and the relation between conservative media and conspiracy beliefs.

Among the conspiracy theories discussed in this book are these:

The book builds on an analysis of data from three cross-sectional surveys and a longitudinal panel, as well as more than 400,000 relevant tweets. The longitudinal national probability panel survey conducted for this book by the Annenberg Public Policy Center was administered from November 2019 through February 2020, measuring belief in the deep state theory, anxiety, and media use.

The authors focus on conspiracy theories that are either unproven (and largely unproveable) or face a preponderance of evidence against them, though the authors note that conspiracy theories are not necessarily false. For instance, the book notes that the conspiracy theory that Russia hacked Democratic servers and “insinuated troll content into American social media in the 2016 election” to damage Hillary Clinton’s presidential candidacy was proven correct.

The book concludes with proposals for when and how to counter conspiracy beliefs and a research agenda for the future.

“A deep social psychological analysis of why so many Americans subscribe to false conspiratorial beliefs is long overdue. Finally, it has arrived! In several landmark studies, Dolores Albarracín and her colleagues find that personal anxiety and exposure to conservative media, which exacerbates feelings of anxiety, drive paranoid thinking about matters of politics and public health. The question now is how to calm everyone down and re-establish some semblance of reality-based consensus in our society before it is too late.” – John T. Jost, New York University

“[A] brilliant monograph reporting an extensive research program that probed the origins of conspiracy beliefs. The authors introduce a social psychological theory that grounds such beliefs in social influence and psychological motivations that are fueled by anxiety and repetitious communicative content… The result is a wide-ranging analysis that illuminates the prevalence of conspiracy beliefs.” – Alice H. Eagly, Northwestern University

Dolores Albarracín is the Alexandra Heyman Nash Penn Integrates Knowledge University Professor of the University of Pennsylvania and director of its Annenberg Public Policy Center’s Science of Science Communication Division. She was formerly a professor of psychology at the University of Illinois at Urbana-Champaign.

Julia Albarracín is a professor of political science at Western Illinois University and is its 2022 Distinguished Faculty Lecturer.

Creating Conspiracy Beliefs: How Our Thoughts Are Shaped

The Annenberg Public Policy Center was established in 1993 to educate the public and policy makers about the media’s role in advancing public understanding of political, health, and science issues at the local, state and federal levels. Find APPC on Facebook and Twitter at @APPCPenn.