Battered by waves of Covid-19 and confusion over shifting government messages about it, Americans’ confidence in the Centers for Disease Control and Prevention (CDC) declined in January with drops both among groups of Democrats/Democratic-leaning independents and Republicans/Republican-leaning independents, according to January survey data from the Annenberg Public Policy Center of the University of Pennsylvania.

Confidence that the CDC is providing the public with trustworthy information about the means of preventing and treating Covid-19 fell from 77% only two months ago, in November 2021, to 72% in January 2022.

In addition, the survey found for the first time a significant drop in confidence in Dr. Anthony Fauci, who as director of the National Institute of Allergy and Infectious Diseases (NIAID) has been the target of withering attacks in conservative media outlets throughout the nearly two-year pandemic. Confidence in Fauci dropped to 65% in January 2022, a statistically meaningful drop over the nine months since April 2021, when it was 71%.

“Overall confidence remains high but has eroded for both Dr. Fauci and the CDC, with the CDC decline more recent and that of Dr. Fauci more gradual,” said Kathleen Hall Jamieson, director of the Annenberg Public Policy Center (APPC). “This is deeply concerning, because voices that speak for the best available science need to be trusted and heard as we navigate the pandemic.”

The January data are from the fifth wave of the Annenberg Science Knowledge (ASK) survey, a nationally representative sample of U.S. adults empaneled by the Annenberg Public Policy Center in April 2021 to track attitudes and behavior in the pandemic. APPC first began tracking beliefs about the novel coronavirus and vaccination with cross-sectional surveys in March 2020.

The current survey was conducted January 11-17, 2022, among a national probability sample of 1,656 U.S. adults. The data were weighted to represent the target U.S. adult population. The margin of error for the total sample is ± 3.3 percentage points at the 95% confidence level. The panel survey, conducted for APPC by independent research firm SSRS is a follow-up to surveys in November 2021, September 2021, June 2021 and April 2021 with the same group of respondents. See the Appendix for the methodology, questions, and additional data.

The survey found that an individual’s primary health care provider continues to be the most trusted source of information about the means of preventing and treating Covid-19. 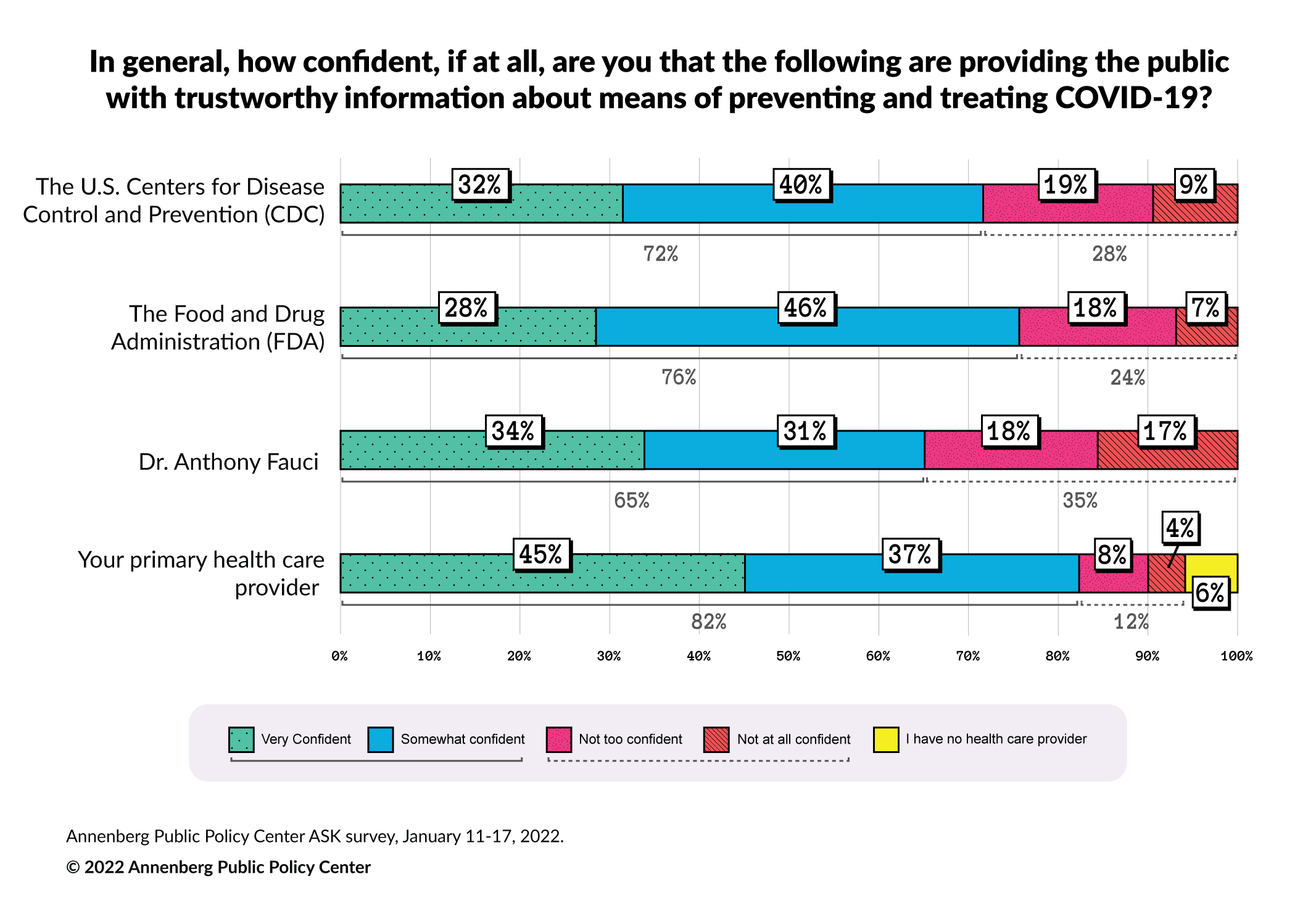 The changes in confidence can be seen in breakdowns by self-identified party affiliations when including respondents who “lean” toward one party or the other. The party leaners are respondents who said they considered themselves independent or neither Republican nor Democrat, but answered a follow-up question by indicating that they thought of themselves as either “closer to the Democratic party” or “closer to the Republican party.”

Media use and confidence in health authorities

The survey found that among heavier users of: 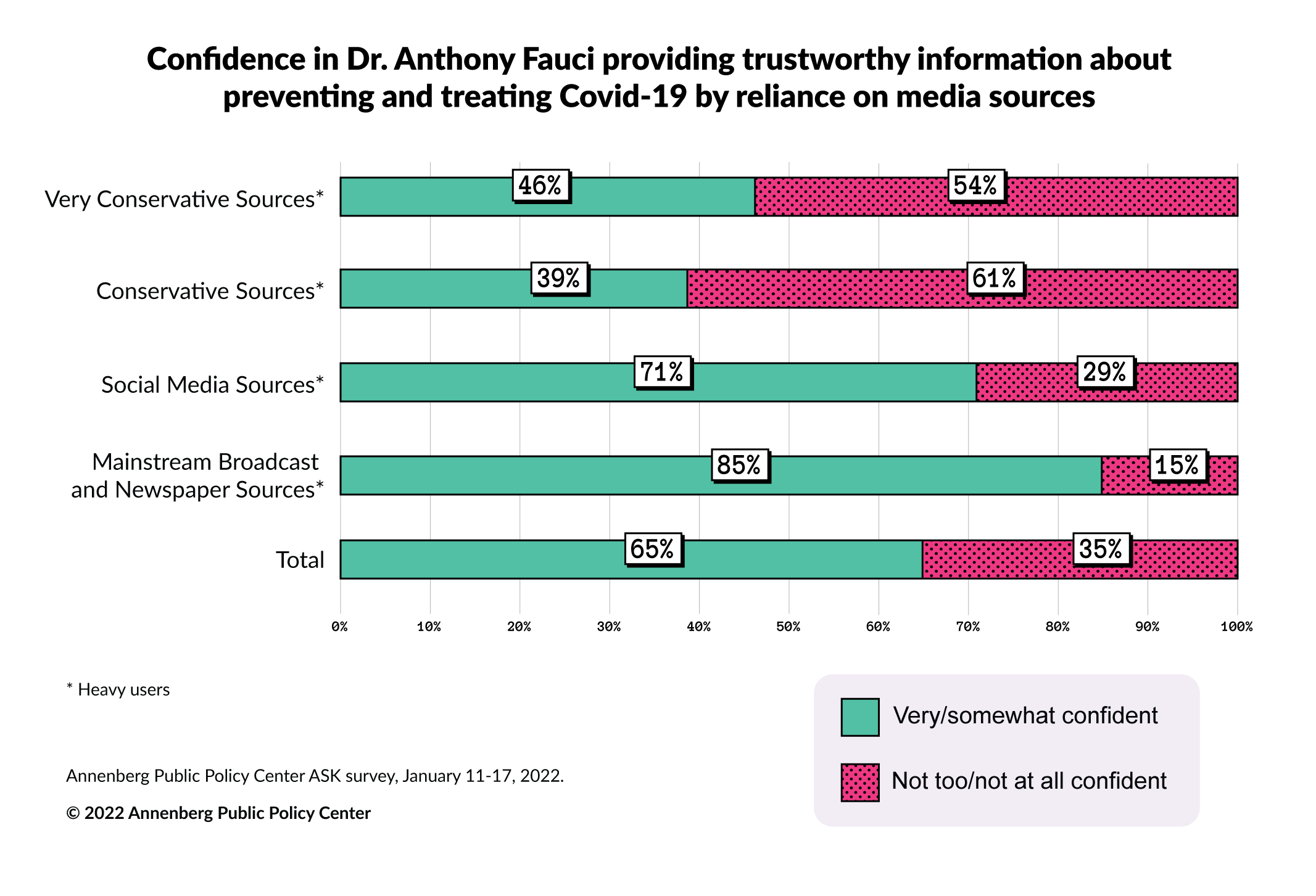 The January survey did not find significant changes since the November survey in these data.

See the Appendix for additional information.

The Annenberg Public Policy Center (APPC) was established in 1993 to educate the public and policy makers about communication’s role in advancing public understanding of political, science, and health issues at the local, state, and federal levels. APPC is the home of FactCheck.org and its SciCheck program, whose Covid-19/Vaccination Project seeks to debunk misinformation about Covid-19 and vaccines, and increase exposure to accurate information. Find @APPCPenn on Twitter and Facebook.