Twenty-one months into the global pandemic, millions of Americans continue to believe misinformation about vaccination and Covid-19, and these beliefs are associated with hesitancy to get themselves and their children vaccinated – or, if they are vaccinated, to get a booster for added protection against the omicron and delta variants.

In the fourth survey conducted with a nationally representative sample of more than 1,600 U.S. adults, in November 2021 the Annenberg Public Policy Center of the University of Pennsylvania continued its tracking of misbeliefs and conspiracy theories that have persisted and, in rare cases, grown since the inception of the pandemic. The policy center has been conducting this panel study since April 2021, and began tracking beliefs about the novel coronavirus and vaccination even earlier, with cross-sectional surveys beginning in March 2020.

“Key consequential deceptions continue to predict hesitancy for oneself and one’s children and a reluctance to get a booster,” said Kathleen Hall Jamieson, director of the Annenberg Public Policy Center (APPC). “Even though more people reject these conspiracies and misbeliefs than accept them, those that have become deeply rooted need to be repeatedly fact-checked, highlighted, and countered by media organizations and health care providers.”

Although confidence in him remains high, the survey also found a softening of support for Dr. Anthony Fauci, who directs the National Institute of Allergy and Infectious Diseases (NIAID). The face of the U.S. pandemic response, Fauci has weathered an extended onslaught of unjustified attacks in conservative and ultraconservative media. While his overall support is unchanged, with two-thirds of Americans confident Fauci is providing trustworthy information on treating and preventing Covid-19, the group of those who support him most strongly has diminished while the ranks of those with no confidence have grown. (See data below.)

The Annenberg Public Policy Center’s Annenberg Science Knowledge (ASK) survey shows that beliefs in conspiracies and misinformation have changed over time. All of the changes noted here between different waves of this survey are statistically significant:

The November Annenberg Science Knowledge (ASK) survey is the fourth wave of data from a nationally representative sample of U.S. adults empaneled by the policy center in the spring of 2021. The survey was conducted November 3-9, 2021, among a national probability sample of 1,672 U.S. adults. Data were weighted to represent the target U.S. adult population. The margin of error for the total sample is ± 3.3 percentage points at the 95% confidence level. The panel survey, conducted for the Annenberg Public Policy Center by SSRS, an independent research company, is a follow-up to September 2021, June 2021 and April 2021 surveys fielded with the same respondents. See the Appendix for the methodology, question wording, and additional data.

An individual’s primary health care provider continues to be the most trusted source of information about the means of preventing and treating Covid-19. The survey found no statistically meaningful changes in overall confidence from September to November: 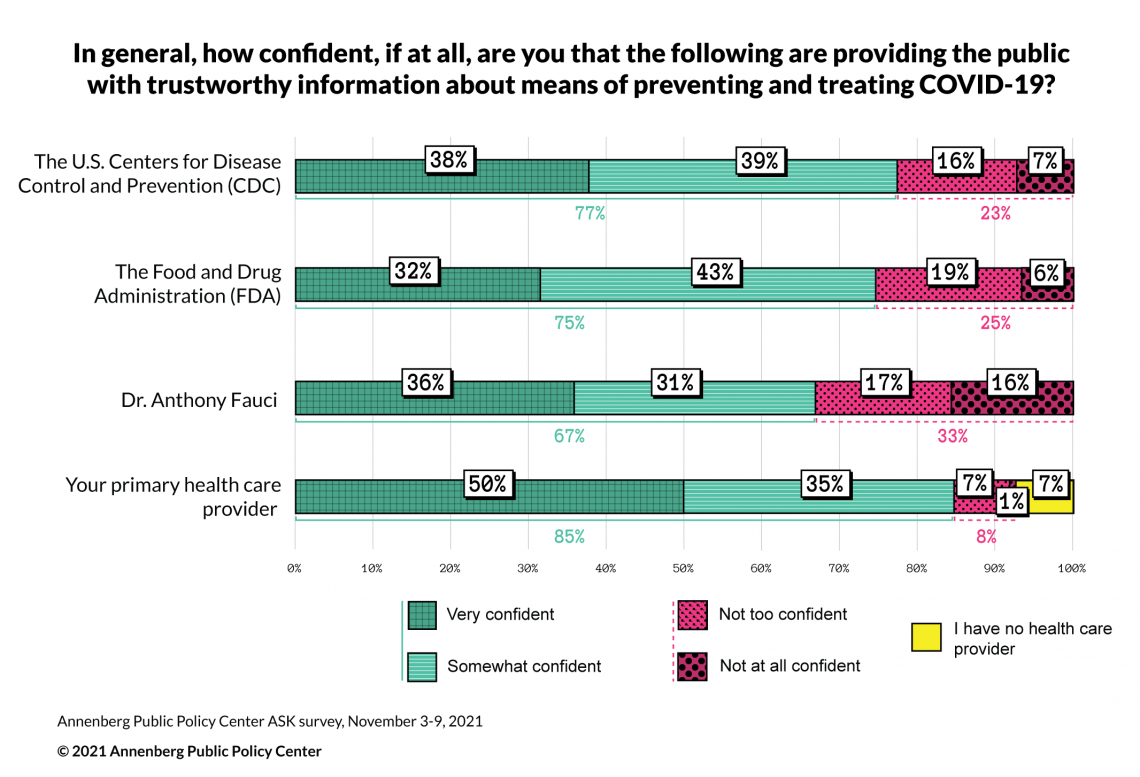 Throughout the pandemic, Fauci has been the target of attacks in conservative media outlets.

For example, on Fox News Primetime on November 29, 2021, guest commentator and streaming show host Lara Logan compared him with the Nazi doctor Josef Mengele, who performed experiments on Jews during World War II. The same night, on his show, Fox News host Tucker Carlson featured a satirical over-the-shoulder graphic of “Lord Fauci, Patron Saint of Wuhan” and said Fauci had “morphed” from “a conventional public health official” into “an even shorter version of [Italian fascist dictator] Benito Mussolini.” On November 19, the Washington Post highlighted the existence of angry calls directed against Fauci prompted by what the paper called a “viral and false claim” that the agency he heads (NIAID) funded an experiment in which sedated beagles were subjected to diseased, biting sand flies. There is no evidence the agency funded this experiment and the agency has denied funding it, according to FactCheck.org, which is a project of the Annenberg Public Policy Center.

While a plurality of people previously said Fauci has no financial stake in any Covid-19 vaccine, opinion on that question is now evenly divided. The survey finds a 37%-37% split on whether it is true or false to say that Fauci has no financial stake in any vaccine compared with April 2021, when by a 42% to 28% margin more said he did not have a financial stake. Fact-checkers have debunked narrower claims about Fauci’s alleged ties to Pfizer and Moderna. National Institutes of Health scientists are on patents related to the Moderna vaccine but Fauci is not one of them.

“These attacks on Dr. Fauci are worrisome,” Jamieson said. “Many months of adverse coverage may be having an effect. Lower confidence in Dr. Fauci and public health agencies and acceptance of conspiracy theories and misinformation both predict a lower likelihood of vaccinating oneself and one’s children, and taking a Covid-19 booster.”

As the earlier waves of the survey have also found, heavier users of conservative and very conservative media have significantly less confidence in U.S. health authorities, notably Fauci, the CDC, and the FDA.

Among the heavier users of: 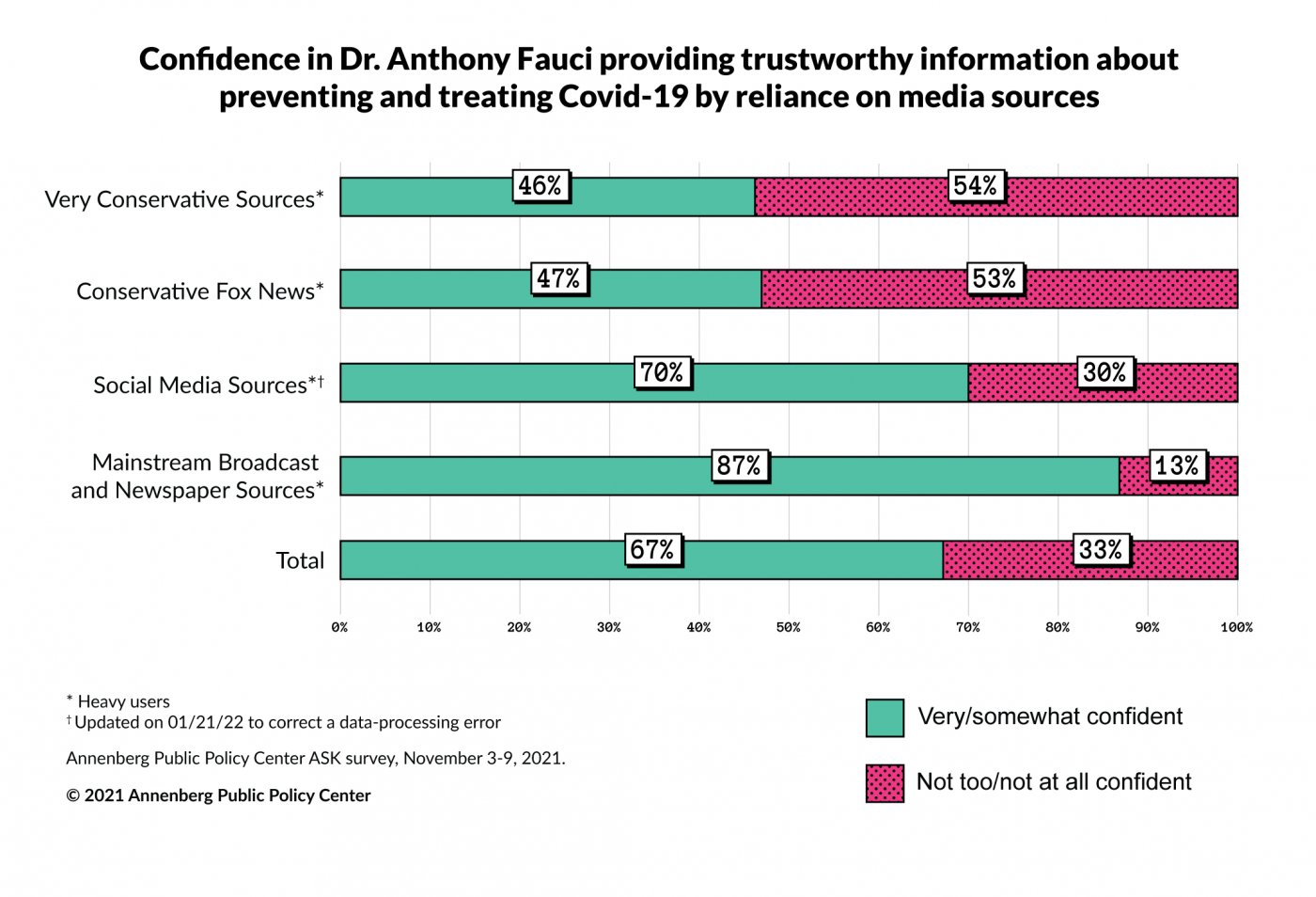 In this survey, heavier users of social media did not have significantly lower confidence in health authorities than the overall sample. There were no statistically meaningful changes among these measures from September to November.

The November survey tracked public responses on these conspiracy theories:

The survey also examined beliefs in other types of information and misinformation, some of which are consistent with findings in a recent Kaiser Family Foundation survey. Ken Winneg, Ph.D., APPC’s managing director of survey research, ran a series of regressions to measure the association between beliefs in misinformation and conspiracy theories and the likelihood of vaccination. In the presence of statistical controls, he found a significant association between individuals’ belief in misinformation and conspiracy theories and vaccine hesitancy for themselves and their children, and reduced likelihood that the individuals would report getting a booster, if they are already vaccinated.

Other survey findings include (all the changes over time noted here are statistically significant):

“The good news is increased public accuracy about three consequential issues that have been the subject of unwarranted concern among those who are vaccination hesitant,” Jamieson said. “More people know that the Covid vaccines do not change your DNA and do not contain fetal tissue, and there is no evidence that they cause infertility. That positive change is evidence of public health messaging and fact-checking at work.”

For additional beliefs, misbeliefs, and conspiracy information, see the graphic below.

See the Appendix for the methodology, question wording, and additional data. 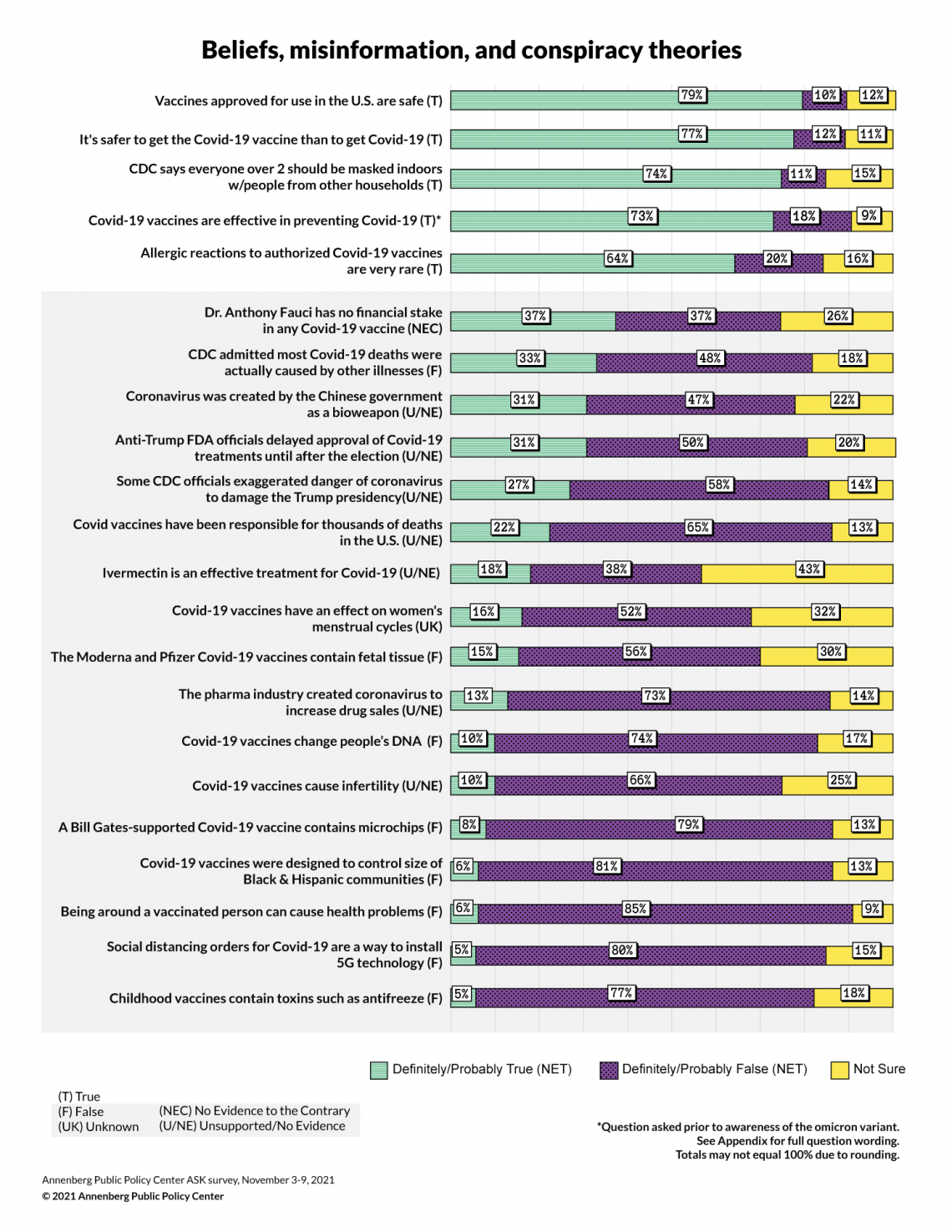