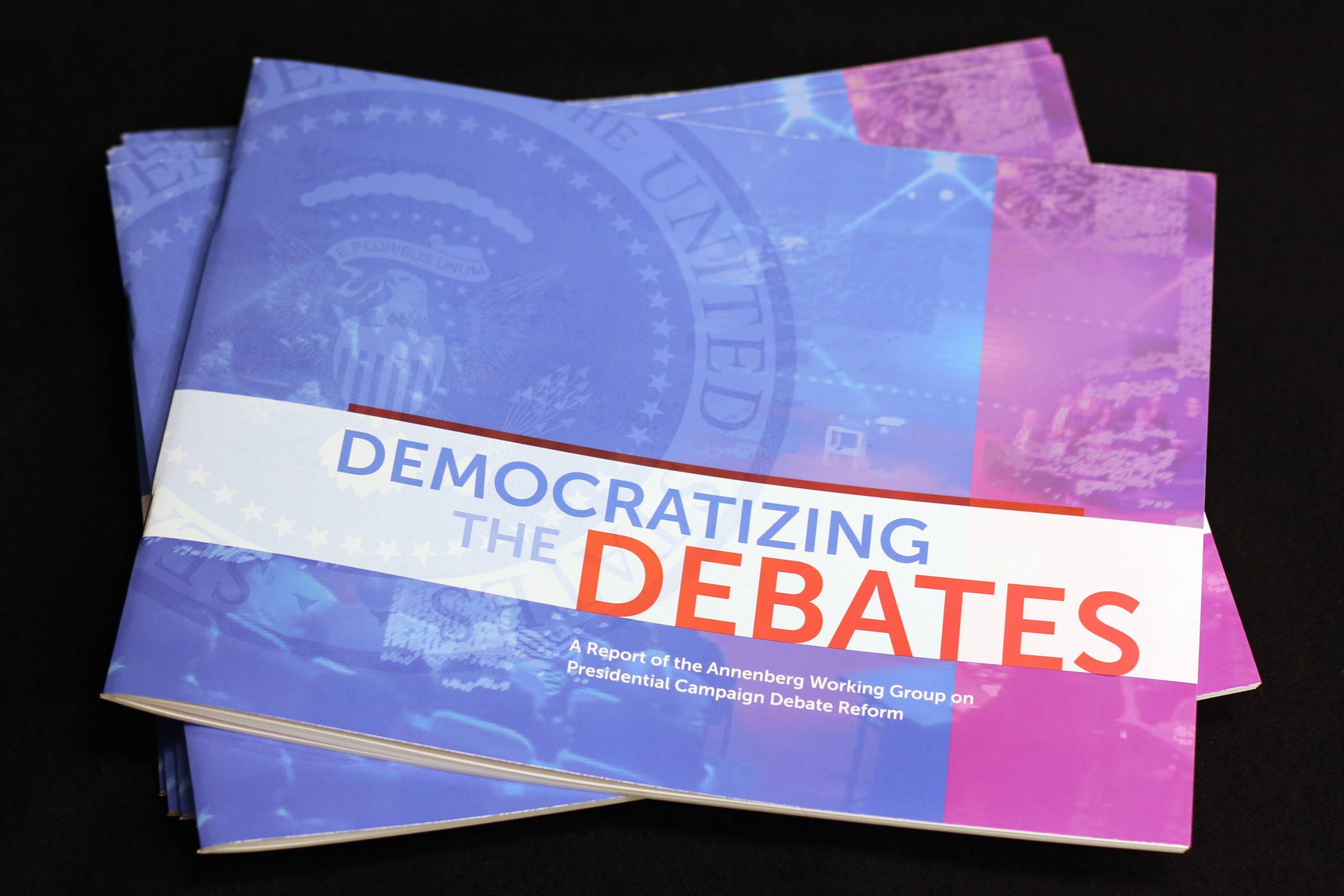 The Working Group, which was formed after the 2012 presidential election, met periodically through the past 18 months with over 40 stakeholders in the presidential debate process, including network officials, social media officials, academics and experts in debates, campaign representatives, and representatives of independent and non-aligned parties and candidates. The 16-person group came together at the suggestion of Kathleen Hall Jamieson, director of the Annenberg Public Policy Center of the University of Pennsylvania, and was co-chaired by Anita Dunn, a former White House communications director for President Obama and senior advisor to his campaign, and Beth Myers, senior advisor to Mitt Romney’s 2012 campaign and campaign manager for his 2008 presidential race.

The recommendations of the Working Group grew out of a shared recognition of the importance of the general election debates to voters seeking information about the candidates, and to the candidates who see the debates as an opportunity to communicate their policy positions directly to voters. The group looked at issues across a broad array of areas with the goal of reforming and modernizing the general election debates for the rapidly changing media and viewing landscape.

The Working Group proposals to change traditional debate formats include a series of substantial reforms aimed at enriching content for viewers, broadening the accessibility of debates and embracing social media platforms, removing the “spectacle” aspect of the debates that requires substantial funding unrelated to the quality of the interaction between the two candidates, and improving the transparency and accountability of the debate process.

Among the reforms the Working Group recommends:

Because a consensus could not be reached on the issue, the Working Group did not make a recommendation in the area of third party participation in debates. A majority, but not the group as whole, did support an escalating level of support for inclusion of third party or independent candidates, with the criteria for participation in the first debate 10 percent of support in public polling, increasing to 15 percent for the second and 25 percent for the third.

“The Annenberg Debate Reform Working Group’s recommendations are designed to increase the value and viewership of debates for all viewers, including those on social media, those who ballot early, and those who identify as independents,” said Jamieson.

“Debates are the single place during the campaign where voters get to see the candidates face to face, side by side, and make their own comparisons and judgments outside of the campaign noise of advertising and news coverage,” Dunn noted. “We came together because campaigns and technology are evolving at lightning speed and it’s important to make sure the debates keep up with the revolution in how voters are accessing and consuming information.”

“The Debate Reform Working Group report is a collaborative and thorough effort to look at every aspect of general election presidential debates to assure that more voters have the opportunity to view a vibrant and meaningful exchange between candidates before casting their vote for president,” said Myers.

The participants in the Working Group were not representing candidates or campaigns and the recommendations in the report should not be interpreted as reflecting the views of any individual candidate or campaign with which members of the Working Group may be affiliated. The Annenberg Debate Reform Working Group’s meetings and background research were funded by the Annenberg Public Policy Center of the University of Pennsylvania. A link to the report can be found here: http://www.annenbergpublicpolicycenter.org/democratizing-the-debates/

To read some of the subsequent news coverage citing this report, click here.