As the Supreme Court’s fall term begins, a new survey from the Annenberg Public Policy Center of the University of Pennsylvania finds that more than a third of Americans say they might be willing to abolish the Supreme Court or have Congress limit its jurisdiction if the court were to make decisions they or Congress disagreed with.

The nationally representative survey conducted in September found sharp increases in the proportion of Americans willing to consider getting rid of or reining in the nation’s highest court.

The survey found that 34% of Americans said “it might be better to do away with the court altogether” if it “started making a lot of rulings that most Americans disagreed with.” And 38% said that when Congress disagrees with the court’s decisions, “Congress should pass legislation saying the Supreme Court can no longer rule on that issue or topic.”

“Respect for judicial independence appears to be eroding,” said Kathleen Hall Jamieson, director of the Annenberg Public Policy Center (APPC). “The willingness of more than 1 in 3 Americans to entertain the idea of abolishing the court or stripping jurisdiction from it is alarming.”

The Annenberg Civics Knowledge Survey was conducted September 7-12, 2021, among 1,008 U.S. adults. The survey was conducted for APPC by SSRS, an independent research company, and has a margin of error of ± 4.0 percentage points at the 95% confidence level.

Additional details are in the Appendix.

The findings follow a contentious year with increased media coverage of the powers, functions, and prerogatives of the three branches of government. Among the past year’s events were a pandemic in which legislatures and courts grappled with health and safety restrictions; a disputed election and unsuccessful efforts to overturn the results in the courts, including the Supreme Court; and Supreme Court rulings on controversial issues, including a ruling that rejected efforts to dismantle the Affordable Care Act and the court’s refusal to review the Covid-19 vaccine mandate for students and employees at Indiana University. Just before the September survey was fielded, the Supreme Court refused, 5-4, to block a Texas law restricting abortion access.

In September, following the Supreme Court’s decision on the Texas abortion law, Barrett appeared before an audience in Kentucky at the 30th anniversary of the McConnell Center at the University of Louisville. “My goal today is to convince you that this court is not comprised of a bunch of partisan hacks,” she said, according to the Louisville Courier Journal. “Judicial philosophies are not the same as political parties,” she added.

‘Do away with’ the Supreme Court

Abolish the court: One-third of respondents (34%) strongly or somewhat agreed with the statement “If the Supreme Court started making a lot of rulings that most Americans disagreed with, it might be better to do away with the Court altogether.” That is a significant increase from the last time we asked this question, in 2019, when 20% agreed. From 2005 to 2018, those who agreed ranged from 17% to 23%. 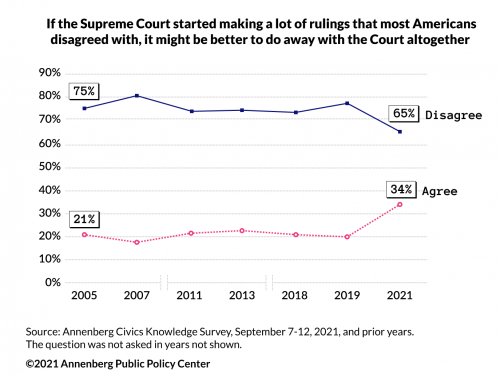 Jurisdiction stripping: 38% strongly or somewhat agreed with the statement “When Congress disagrees with the Supreme Court’s decisions, Congress should pass legislation saying the Supreme Court can no longer rule on that issue or topic.” That is significantly higher than the 28% who agreed when the question was asked in 2018. The response was 22% to 23% from 2007 to 2013. 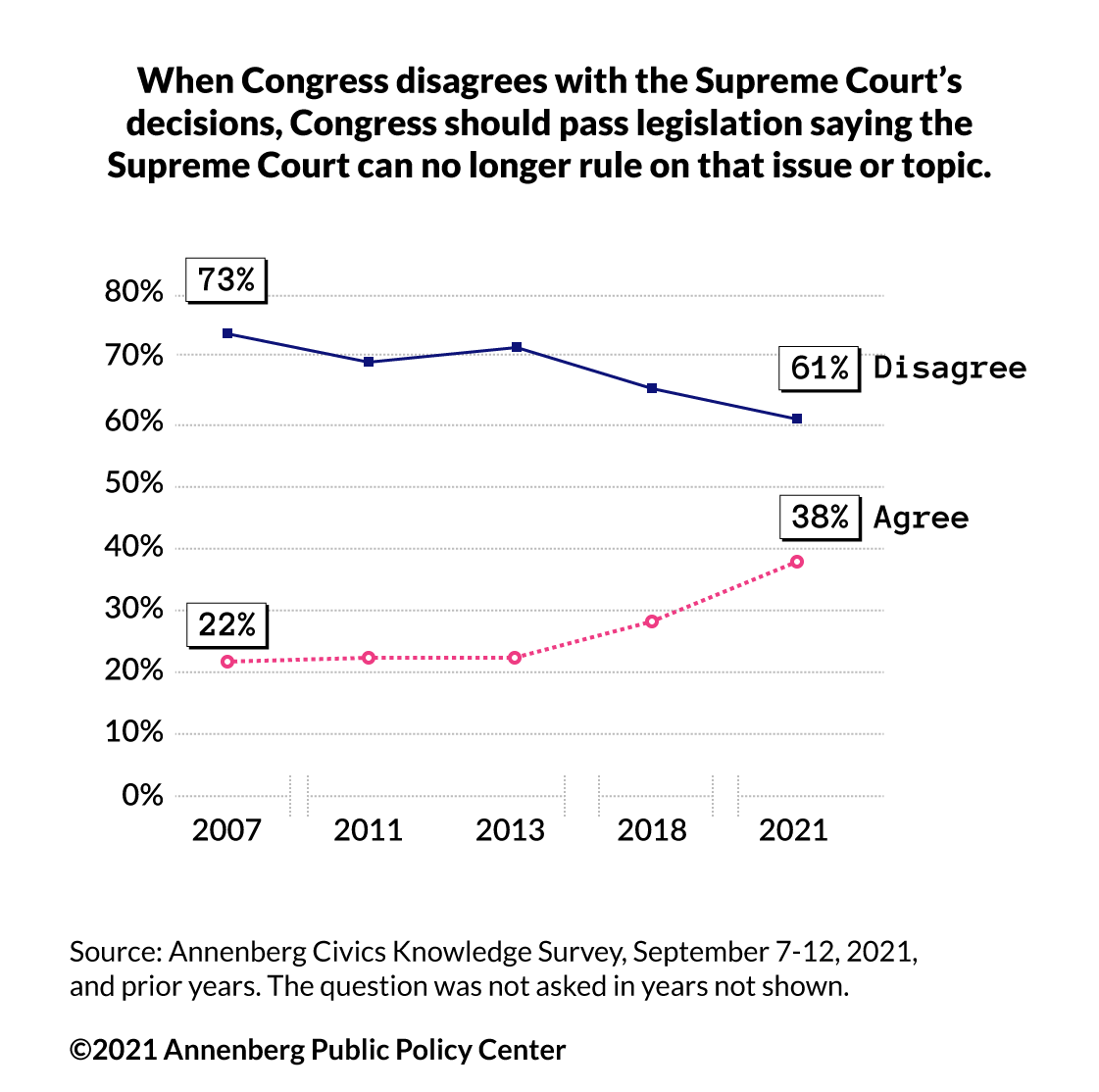 Civics knowledge and the high court

The Annenberg Public Policy Center’s Constitution Day Civics Survey, part 1 of this Civics Knowledge Survey, which was conducted in August and released in advance of Constitution Day (September 17), found that a growing number of Americans correctly named the three branches of government and the freedoms protected by the First Amendment. This year, 56% of Americans named all three branches, which is a new high in the survey and significantly higher than the 51% in 2020 and 39% in 2019.

But the survey also found that a sizable number of Americans misunderstood other basic facts about government. While 61% knew that when the Supreme Court rules 5-4 in a case “the decision is the law and needs to be followed,” a third of respondents (34%) said the decision is either sent back to the federal court of appeals to be decided or to Congress for reconsideration.

An analysis of the Supreme Court survey data by Ken Winneg, Ph.D., APPC’s managing director of survey research, finds that taking a high school civics course has a significant indirect effect on protecting the Supreme Court. Using path modeling, we found that people who said they took a high school civics course are more likely to have higher levels of civics knowledge. Those who have higher levels of civics knowledge are more likely to disagree with statements calling for abolishing the court or having Congress strip the court of some of its jurisdiction.

This analysis is compatible with findings reported in a 2008 article by Jamieson and Bruce Hardy in the journal Daedalus, which found that high school civics predicts increased knowledge; increased knowledge predicts increased trust in the judiciary; and with increased trust comes “a heightened disposition to protect judges from impeachment for popular rulings and the judiciary from stripped jurisdiction. Trust also increased the belief that the Supreme Court should be retained in the face of unpopular rulings.”

For additional details, see the Appendix.