With a musical flourish, the Leonore Annenberg Funds celebrated the end of a successful 10-year run.

The Leonore Annenberg Scholarship, Fellowship, and School Funds marked a decade of helping emerging artists, college-bound students, and under-funded public schools on April 13 with a recital at the Annenberg Public Policy Center (APPC). The recital, attended by the philanthropy’s Selection Council along with members of the APPC community and several arts fellows, featured moving performances by violinist Francesca dePasquale, a 2014 Leonore Annenberg arts fellow, and pianist Reiko Uchida.

Performing in the Agora of the policy center, at which the philanthropy is based, DePasquale, a member of the violin faculty at Rutgers University Mason Gross School of the Arts, and Uchida, an associate faculty member at Columbia University, played works by Leclair, Brahms, Bartók, and Korngold.

Under the direction of Gail C. Levin, former executive director of the Annenberg Foundation, the Leonore Annenberg Funds provided a total of more than $23 million in grants. That included $7 million in arts fellowships, $7 million for public schools, and $9 million in college scholarships. Those achievements were celebrated by the program in a full-page ad that ran in the New York Times on March 18, 2018.

Annenberg Public Policy Center Director Kathleen Hall Jamieson announced at a reception that the policy center’s central two-story atrium would be named in honor of Dr. Levin, who as director of the program “enhanced the lives of artists, students, and elementary school children.”

Among the visual artists and performers who have received the award are the ballet dancer Misty Copeland, who was named in the first group of recipients, in 2008; actor Bryce Pinkham; mezzo-soprano Samantha Hankey; actor André Holland; painter and sculptor Angel Otero; violinist and composer Michelle Ross; mezzo-soprano Isabel Leonard; and photographer Richard Mosse. 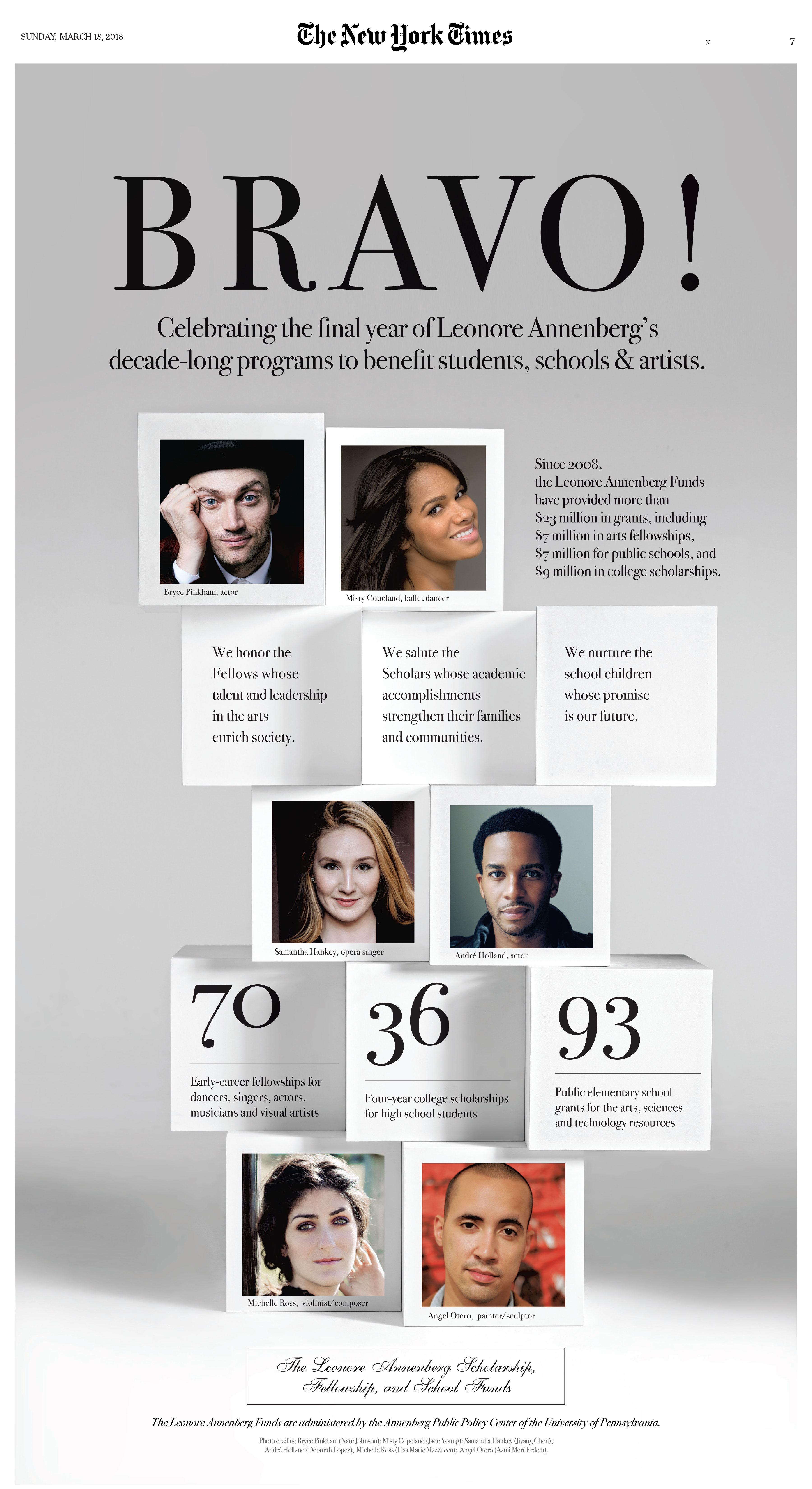 Recipients of the $50,000-a-year arts fellowships have used the funding to cover studio time and touring, record a first album, shoot a low-budget film, buy an instrument, pay for vocal and dance training, afford healthcare and repay student loans. In other words, the funding has allowed promising artists the time, space, and resources to focus on their art.

The elementary school grants, directed toward urban and rural schools serving a large proportion of impoverished students, furnished schools with resources such as theater and dance programs, computers and educational technology, library upgrades, and new books and e-readers for classrooms and libraries.

In a video, a recipient of the scholarship who graduated from Harvard spoke about the impact it had on his life.

“The Leonore Annenberg Scholarship program changed my life by offering me an all-expenses-paid scholarship to any college I chose to attend. … But this program has not been just about paying for tuition and health fees. It was about making sure that wherever one of the scholars wanted to go, they would be able to take advantage of every opportunity college had to offer, social and academic. The generous stipend allowed us to forego working out of need and allowed us to study, work, and play how we chose….

“Perhaps the most valuable component of this scholarship program is the mentorship and support I have received from the wonderful staff, especially Dr. Levin,” the student added. “It gave me the resources and support to be accepted to Columbia University’s medical school and to receive the Rhodes Scholarship. But most importantly, it gave me the perspective to know that this scholarship is an investment in the future. It is an investment in me and my peers to make the world a better place, to pay it forward.”