One of the reports examines how the news media framed stories about ethical issues surrounding the controversial gene-editing technology CRISPR/Cas9, starting with its earliest appearances in the press. The other considers how the media covered scientific studies that have been retracted, focusing on three high-profile examples.

The CRISPR report looked at the headlines of 857 articles from mid-2012 to mid-2017 that mentioned CRISPR/Cas9 and ethics. Coverage about CRISPR and ethics was more often framed positively (38 percent) or as balanced (43 percent) than negatively (19 percent). Coverage spiked in December 2015, when the National Academies of Sciences, Engineering, and Medicine convened a summit on gene editing and when Congress voted to prevent public funds from being used to review drugs or biological products related to germline editing.

Click here for the report Media Framing of News Stories About the Ethics, Benefits, and Risks of CRISPR/Cas9. 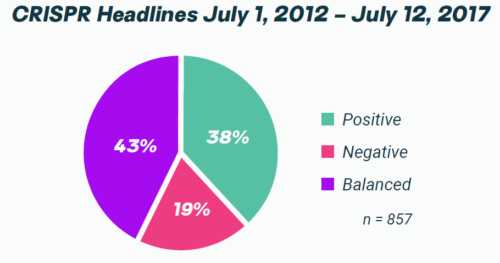 News pieces about retractions treat those due to unintended error differently than those withdrawn for malfeasance or fraud. This report looks at one of the former (Mediterranean diet), which attributed the retractions to researcher error rather than intentional deception, and two of the latter. Reporting on the Lönnstedt-Eklöv study and on Wansink’s numerous withdrawn papers adopted the counterfeit quest narrative, chronicling the activities of a deceptive researcher who has gulled custodians of knowledge such as journal editors and peer reviewers.

The APPC analysis involved 172 print and digital news articles from 2016-2018 about one of those retractions. The report found that:

Click here for the report How the Media Frame News Stories About Retractions of Scientific Findings.