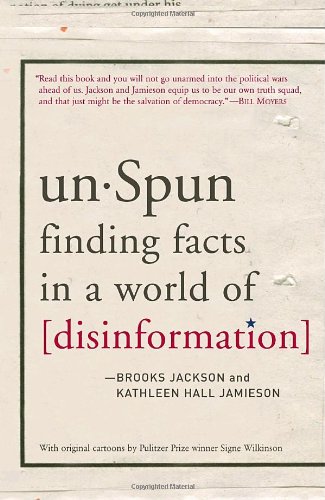 Americans are bombarded daily with mixed messages, half-truths, misleading statements, and out-and-out fabrications masquerading as facts. The news media–once the vaunted watchdogs of our republic–are often too timid or distracted to identify these deceptions.

unSpun is the secret decoder ring for the twenty-first-century world of disinformation. Written by Brooks Jackson and Kathleen Hall Jamieson, the founders of the acclaimed website FactCheck.org, unSpun reveals the secrets of separating facts from disinformation, such as:

• the warning signs of spin, hype, and bogus news
• common tricks used to deceive us
• how to find trustworthy and objective sources of information

Telling fact from fiction shouldn’t be a difficult task. With this book and a healthy dose of skepticism, anyone can cut through the haze of biased media reportage to be a savvier consumer and a better-informed citizen.

“Read this book and you will not go unarmed into the political wars ahead of us. Jackson and Jamieson equip us to be our own truth squad, and that just might be the salvation of democracy.”
–Bill Moyers

“unSpun is an essential guide to cutting through the political fog. Just in time for the 2008 campaign, Brooks Jackson and Kathleen Hall Jamieson have written a citizen’s guide to avoiding the malarkey of partisan politics.”
–Mara Liasson, NPR national political correspondent

“The Internet may be a wildly effective means of communication and an invaluable source of knowledge, but it has also become a new virtual haven for scammers–financial, political, even personal. Better than anything written before, unSpun shows us how to recognize these scams and protect ourselves from them.”
–Craig Newmark, founder and customer service representative, Craigslist.org