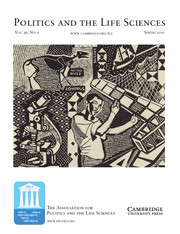 This Perspective is based on the keynote plenary lecture delivered at the Annual Conference of the Association for Politics and the Life Sciences (APLS), held on October 23, 2015, at the University of Wisconsin–Madison.

In these comments, I adopt a rhetorical perspective in order to consider the role of language in clarifying or confusing the public and public debates on a number of consequential polarized topics in the life sciences. My analysis is predicated on Samuel Taylor Coleridge’s notion that “language itself does, as it were, think for us.” Literary critic Kenneth Burke advanced the same concept in humorous fashion when he suggested that a toast I was slated to deliver in his honor state simply, “Language can do our thinking for us but language cannot do our drinking for us.”

From that premise, I will advance three sober arguments: Custodians of knowledge tell us what science knows and how it knows it. Their language can enhance or cloud public understanding of the underlying science. Because language plays these roles, we need to be aware of the ways in which audiences hear the language that is used to conceptualize scientific concepts. When, advertently or not, linguistic choices miscommunicate the underlying science, the policy debate becomes muddied and the credibility of the science is more susceptible to polarizing challenge.

Click here to obtain the article from Cambridge University Press.