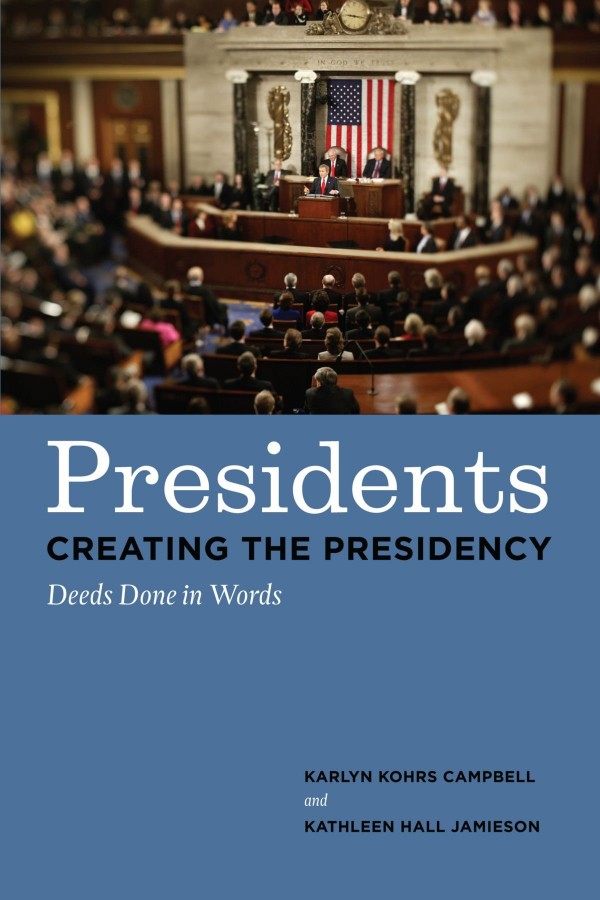 Arguing that “the presidency” is not defined by the Constitution—which doesn’t use the term—but by what presidents say and how they say it, Deeds Done in Words has been the definitive book on presidential rhetoric for more than a decade. In Presidents Creating the Presidency, Karlyn Kohrs Campbell and Kathleen Hall Jamieson expand and recast their classic work for the YouTube era, revealing how our media-saturated age has transformed the ever-evolving rhetorical strategies that presidents use to increase and sustain the executive branch’s powers.

Identifying the primary genres of presidential oratory, Campbell and Jamieson add new analyses of signing statements and national eulogies to their explorations of inaugural addresses, veto messages, and war rhetoric, among other types. They explain that in some of these genres, such as farewell addresses intended to leave an individual legacy, the president acts alone; in others, such as State of the Union speeches that urge a legislative agenda, the executive solicits reaction from the other branches. Updating their coverage through the current administration, the authors contend that many of these rhetorical acts extend over time: George W. Bush’s post-September 11 statements, for example, culminated in a speech at the National Cathedral and became a touchstone for his subsequent address to Congress.

For two centuries, presidential discourse has both succeeded brilliantly and failed miserably at satisfying the demands of audience, occasion, and institution—and in the process, it has increased and depleted political capital by enhancing presidential authority or ceding it to the other branches. Illuminating the reasons behind each outcome, Campbell and Jamieson draw an authoritative picture of how presidents have used rhetoric to shape the presidency—and how they continue to re-create it.