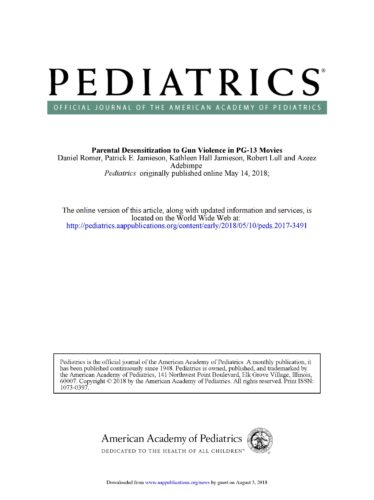 METHODS: A national US sample of 610 parents with at least 1 child between ages 6 and 17 was randomly assigned to view a series of four 90-second video clips from popular films depicting violent gun use under either justified or unjustified conditions. Graphic consequences were removed to mimic the violence common in PG-13 movies. Parents reported their perceived justification for the violence, their emotional reaction while viewing it, the minimum age they would consider appropriate for viewing the film, and whether they would allow their own child to view it. Predictors included experimental condition, viewing order, child age, and recent moviegoing. Growth curve modeling determined the effects of the predictors on both intercepts and slopes of viewing order.

RESULTS: Parents were less emotionally upset and more accepting of child viewing for justified than unjustified gun violence, with perceptions of justification better predictors of parental restriction than emotion. Nevertheless, with the exception of parents with extensive moviegoing habits, parents viewed justified violence as appropriate for adolescents starting at age 15, older than the PG-13 rating suggests.