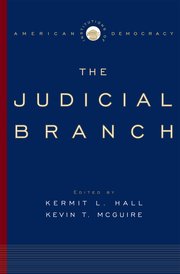 In recent years the Supreme Court has been at the center of such political issues as abortion rights, the administration of police procedures, and the determination of the 2000 presidential election. The checks and balances provided by the three branches of federal government are essential to nurturing and maintaining American democracy. With the guidance of coeditors Kermit L. Hall and Kevin T. McGuire, this volume of essays examines the role of the Judicial Branch in American democracy and the dynamic between the other branches of government, compares international models, and discusses possible measures for reform.

The Judicial Branch considers the impact of courts on American life and addresses such central questions as: Is the Supreme Court an institution of social justice? Is there a case for judicially created and protected social rights? Have the courts become sovereign when interpreting the Constitution?
Essays examine topics that include the judiciary in the founding of the nation; turning points in the history of the American judicial system; the separation of powers between the other branches of government; how the Supreme Court resolves political conflicts through legal means; what Americans know about the judiciary and its functions; and whether the American scheme of courts is the best way to support democracy.

Purchase a copy of the book: