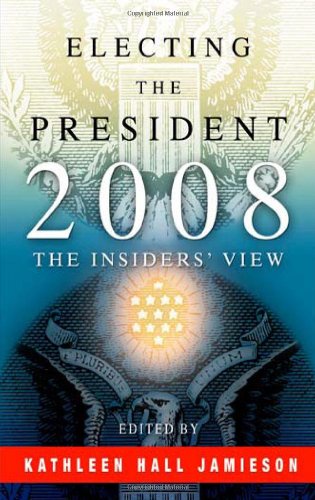 Just weeks after the November 2008 election, the Annenberg Public Policy Center’s Kathleen Hall Jamieson and FactCheck.org’s Brooks Jackson gathered top strategists and consultants for postelection analysis. Nicolle Wallace, Ambassador Mark Wallace, Jon Carson, Steve Schmidt, Bill McInturff, and Chris Mottola from the McCain-Palin camp met with David Plouffe, David Axelrod, Joel Benenson, Jim Margolis, and Anita Dunn, their counterparts from the Obama-Biden camp to share their insights into one of the most unusual presidential elections in American history. Representatives of the Democratic and Republican National Committees and the major independent expenditure groups did the same.

In the resulting book, Electing the President, 2008, the consultants who managed the 2008 presidential campaign retrace the decisions that shaped the historic presidential election. Like Electing the President, 2000 and Electing the President, 2004, this work permits readers to eavesdrop on the first cross-campaign discussion that occurred in the nation after Election Day. These political experts assess the importance of new factors ranging from campaign spending to the performance of the press corps, from the effect of the Internet on news cycles to the influence of Tina Fey. Democratic and Republican insiders explain the strategies behind the debates and advertising, reveal what their internal polls showed, and share what they did well and poorly in their efforts to elect the forty-fourth president of the United States.

In addition to insider commentary, Electing the President, 2008 presents political communications and strategy researchers with an election timeline and polling data from the National Annenberg Election Survey. This book offers a ringside seat to what may prove to be the most pivotal political contest for a long time to come. An included DVD features selected video of the proceedings.

Kathleen Hall Jamieson, PhD
Purchase a copy of the book