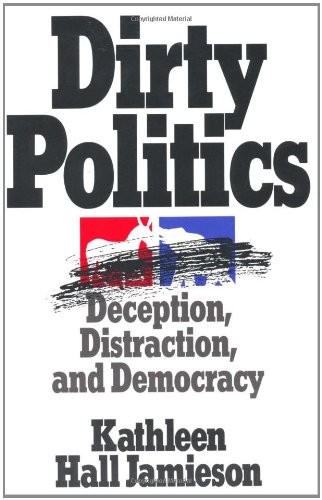 Americans in recent years have become thoroughly disenchanted with our political campaigns, especially with campaign advertising and speeches. Each year, as November approaches, we are bombarded with visceral appeals that bypass substance, that drape candidates in the American flag but tell us nothing about what they’ll do if elected, that flood us with images of PT-109 or Willie Horton, while significant issues–such as Kennedy’s Addison’s Disease or the looming S&L catastrophe–are left unexamined. And the press–the supposed safeguard of democracy–focuses on campaign strategy over campaign substance, leaving us to decide where the truth lies.
In Dirty Politics, campaign analyst Kathleen Hall Jamieson provides an eye-opening look at political ads and speeches, showing us how to read, listen to, and watch political campaigns. Jamieson provides a sophisticated (and often humorous) analysis of advertising technique, describing how television ads use soft focus, slow motion, lyrical or patriotic music (Reagan used “I’m Proud to be an American”) to place a candidate in a positive light, or quick cuts, black and white, videotape, and ominous music (for instance, the theme from “Jaws”) to portray the opposition. She shows how ads sometimes mimic news spots to add authenticity (Edwin Edwards, in his race against David Duke, actually used former NBC correspondent Peter Hackis, who would begin an ad saying “This is Peter Hackis in Baton Rouge”). And Jamieson points out that consultants create inflammatory ads hoping that the major networks will pick them up and run them as news, giving the ad millions of dollars of free air time. The most striking example would be the Willie Horton ad, which the press aired repeatedly (as an example of negative advertising) long after the ad had ceased running. (In fact, it never ran on the major networks as an ad, only as news.)
From a colorful, compact history of negative campaigning from Eisenhower to the present, to an in-depth commentary on the Willie Horton ads, to an up-to-the-minute analysis of the Duke-Edwards campaign in Louisiana, Dirty Politics is both a fascinating look at underhanded campaigning as well as a compelling argument for fair, accurate, and substantive campaigns. It is a book that all voters should read before they vote again.

Kathleen Hall Jamieson, PhD
Purchase a copy of the book