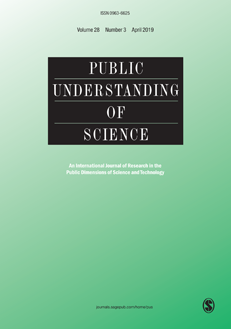 A conversion narrative recounts the process that led the speaker to reject one belief for a different, usually incompatible, alternative. However, researchers know little about whether, when, and, if so, how such messages affect audience attitudes about controversial science. Using a general US population-sample experiment, we assessed the attitudinal impact of three versions of a statement by Mark Lynas, an environmental activist who converted from opposing to championing genetically modified crops. Participants were exposed to (1) a one-sided pro-genetically modified message by Lynas, (2) a two-sided pro-genetically modified message in which Lynas indicates but does not detail his conversion, or (3) a two-sided pro-genetically modified message in which Lynas explains the process that prompted his conversion. We find that his conversion messages influenced attitudes by way of perceived argument strength, but not speaker credibility. This finding implies such messages induce greater elaboration, which may lead to durable attitudes that predict behavior.

Click here to read the full article from Public Understanding of Science.