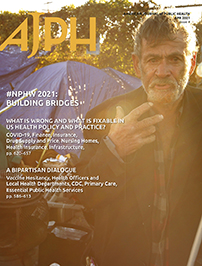 Reducing the use of tobacco and cigarettes in particular is a worldwide objective. The World Health Organization (WHO) Framework Convention on Tobacco Control1 (adopted in 2003), along with the WHO Global Action Plan for the Prevention and Control of Noncommunicable Diseases2 (adopted in 2013), set a goal of a 30% reduction in overall tobacco use worldwide from 2010 to 2025. Because cigarettes make up the majority of this use and are arguably the most harmful of tobacco products, they deserve the majority of the attention in this effort.

The article by Maia et al. (p. 730) presents results from the effort to reduce cigarette consumption in Brazil from 2006 to 2019. The findings indicate that Brazil’s policies have been among the most successful in the Americas and the world in reducing cigarette consumption. At the same time that Brazil has enjoyed success in reducing the use of tobacco and cigarettes in particular, it has encountered some of the challenges that appear to also plague the United States.