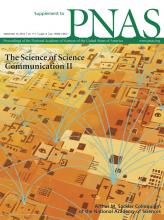 This work argues that, in a polarized environment, scientists can minimize the likelihood that the audience’s biased processing will lead to rejection of their message if they not only eschew advocacy but also, convey that they are sharers of knowledge faithful to science’s way of knowing and respectful of the audience’s intelligence; the sources on which they rely are well-regarded by both conservatives and liberals; and the message explains how the scientist arrived at the offered conclusion, is conveyed in a visual form that involves the audience in drawing its own conclusions, and capsulizes key inferences in an illustrative analogy. A pilot experiment raises the possibility that such a leveraging–involving–visualizing–analogizing message structure can increase acceptance of the scientific claims about the downward cross-decade trend in Arctic sea ice extent and elicit inferences consistent with the scientific consensus on climate change among conservatives exposed to misleadingly selective data in a partisan news source.