Most Americans see the U.S. Supreme Court as a trusted institution, according to the latest Annenberg Civics Knowledge Survey. Two-thirds (68%) of those surveyed trust the Supreme Court to operate in the best interests of the American people, while 7 in 10 (70%) say that that court has “about the right amount of power.”

But the survey also identified troubling signs in how the Supreme Court and the justices are perceived by the public, suggesting that the distinction between judges and elected politicians is becoming blurred. More than half of Americans (57%) agree with the statement that the court “gets too mixed up in politics.” And just half of the respondents (49%) hold the view that Supreme Court justices set aside their personal and political views and make rulings based on the Constitution, the law, and the facts of the case.

“Because the well-being of our system of government depends on the integrity of an independent, impartial, fair judiciary and on the public perception that judges honor these expectations, the persistently high levels of trust in the Supreme Court that we find reflected in Annenberg surveys should be celebrated,” said Kathleen Hall Jamieson, director of the Annenberg Public Policy Center of the University of Pennsylvania. “But the finding that half do not believe that Supreme Court justices set aside their personal beliefs in deciding cases is worrisome.”

The survey of 1,104 U.S. adults was conducted in August for the Annenberg Public Policy Center (APPC) in advance of the Fair & Impartial Judiciary Symposium on October 26, 2019, at the University of Pennsylvania. The event is sponsored by APPC, the Rendell Center for Civics and Civic Engagement, Penn Law, and the Pennsylvania Commission on Judicial Independence. Read more about it here.

Positive views and increased trust in the Supreme Court

The Annenberg Civics Knowledge Survey finds signs that the high court is viewed positively and trusted:

Comparing Annenberg surveys in 2013 and 2019, we find that overall trust (great deal/fair amount) in the Supreme Court increased from 58% to 68%, driven mainly by conservatives. From 2013 to 2019, trust in the court among self-described conservatives increased significantly from 50% to 73%. Among moderates and liberals, differences registered in the two surveys were not statistically significant. In the 2019 survey, 71% of moderates and 58% of liberals said they trusted the court to operate in the best interests of the American people. 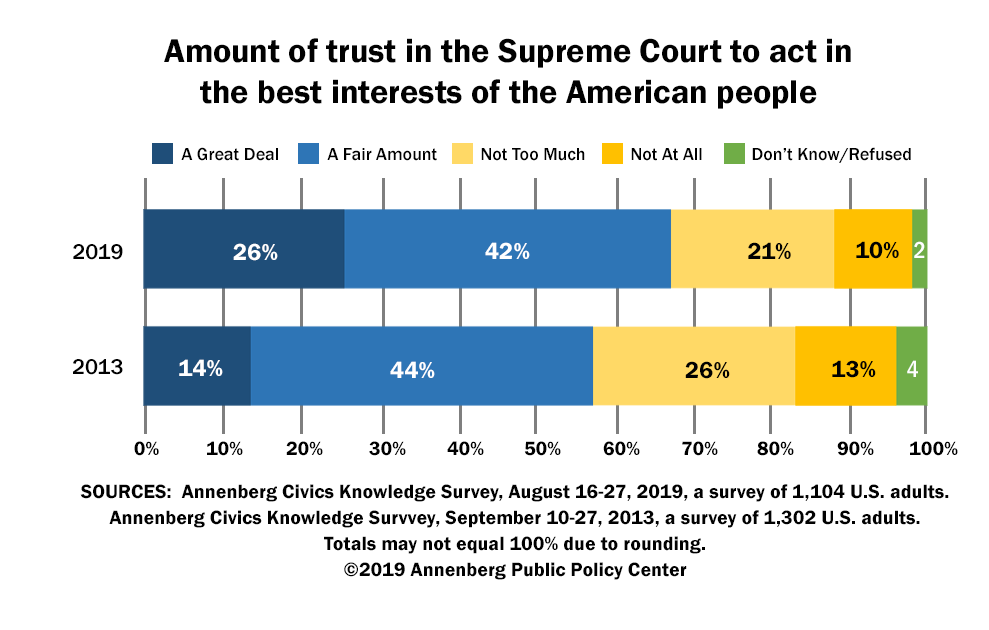 Understanding the need for fair and impartial judges

Americans have a clear vision of what they value in a judge, the survey found. Respondents were asked to rate various qualities as essential, important, somewhat important, and not too important when electing state and local judges. Americans said they want judges who:

In electing state and local judges, Americans consider it less important that judges:

Blurring the line between judges and elected political leaders

The fact that a little over a third of survey respondents consider shared political beliefs essential or very important suggests possible confusion about the role of a judge, noted Jamieson.

“Chief Justice Roberts famously said, ‘We do not have Obama judges or Trump judges, Bush judges or Clinton judges,’” Jamieson noted. “Our findings suggest that a notable percent of the population believes that the decisions of justices are politically aligned with the ideology of the president who nominated them.” 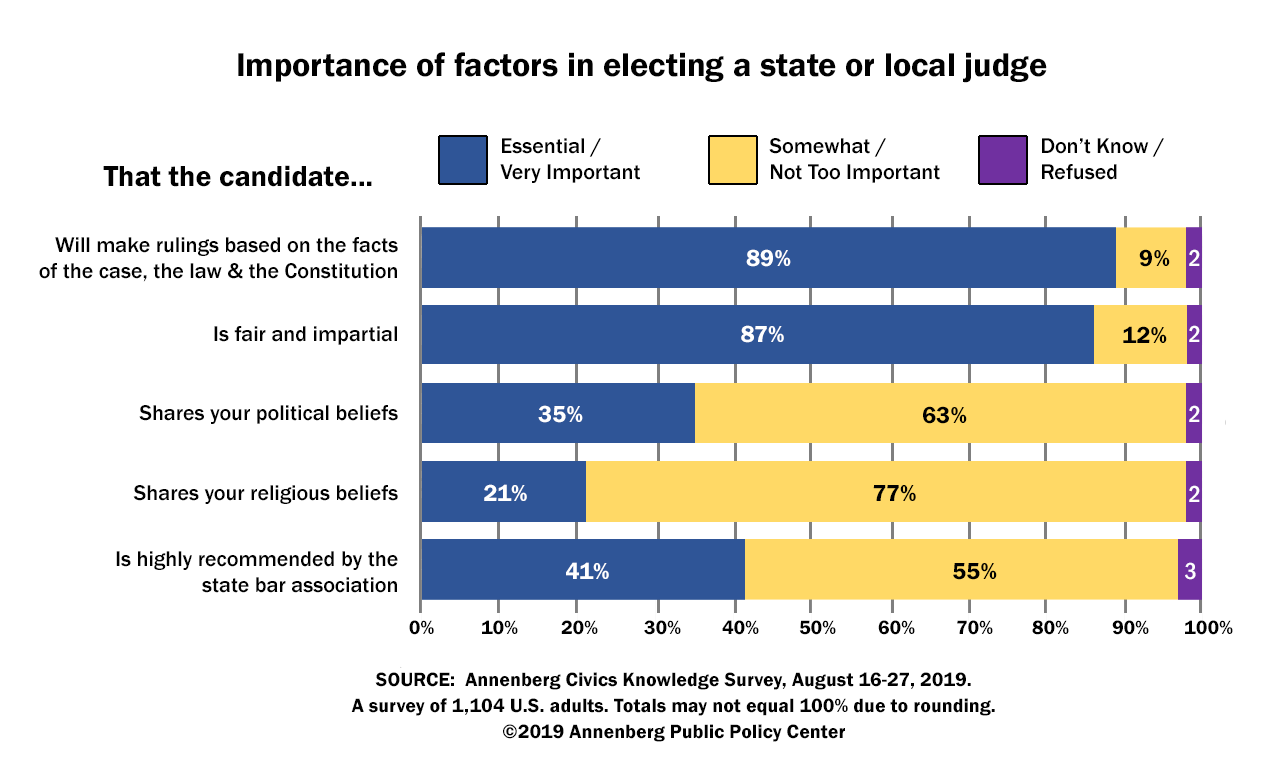 Protecting the Supreme Court from interference

The survey also found that:

“Any evidence of public willingness to restrict the independence of the judicial branch should raise alarm,” Jamieson said.

The Annenberg Civics Knowledge Survey, under the supervision of Ken Winneg, Ph.D., APPC’s managing director of survey research, was conducted August 16 to 27, 2019, for the Annenberg Public Policy Center by SSRS, an independent research company. Interviews were conducted with 1,104 U.S. adults, ages 18 and older. The margin of error was ±3.6 percentage points. For more information, download the Appendix.