FactCheck.org, the nonpartisan, nonprofit “consumer advocate” for voters, has been awarded the 2015 Webby for best Political Blog/Website by the International Academy of Digital Arts and Sciences. And thanks to its readers, it has also been awarded the People’s Voice Webby in the same category. 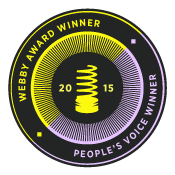 The other finalists for best Political Blog/Website were Politico, New Zealand-based On the Fence, the Rolling Stone feature “America’s Gun Violence Epidemic,” and past winner Truthdig.

The 19th annual Webby awards received nearly 13,000 entries from all 50 states and more than 60 countries.