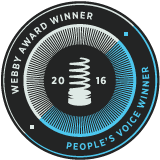 FactCheck.org, the nonpartisan, nonprofit “consumer advocate” for voters, has been awarded the Webby for best Political Blog/Website, and has also received the People’s Voice Webby in the same category, thanks to its readers. Known as “the Oscars of the Internet,” the Webbys, now in their 20th year, annually honor the best of the Internet and are presented by the International Academy of Digital Arts and Sciences.

The other finalists for best Political Blog/Website were The Nation, the Council on Foreign Relations’ feature “The Eastern Congo,” Bloomberg Politics, and past winner Truthdig.