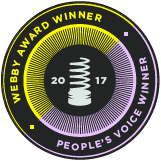 For the fourth consecutive year, FactCheck.org has been awarded both the Webby for Political Blog/Website, as chosen by a panel of judges, and the People’s Voice award in the same category, thanks to its readers. The 21st Annual Webby Awards, presented by the International Academy of Digital Arts and Sciences, honor excellence on the Internet, including websites, advertising, apps, videos, and more.

This year, the Webby Awards received 13,000 entries from all 50 states and 70 countries around the world, and over 3.5 million people in 235 countries and territories cast their votes for the People’s Voice Awards.

With these latest awards, FactCheck.org has won the judges’ Webby award for best political site a total of eight times, and the People’s Voice award, as voted by the public, a total of 10 times.

The other finalists for best Political Blog/Website were the Intercept, PBS’s “2016 Campaign Connection” feature, the Center for Public Integrity’s “Election 2016” feature, and Code and Theory’s site Crisis Group.

FactCheck.org, a project of the Annenberg Public Policy Center, is a nonpartisan, nonprofit “consumer advocate” for voters whose core mission is to “reduce the level of deception and confusion in U.S. politics.” The site fact-checks science-based claims via its SciCheck feature and exposes false viral claims through Ask FactCheck.