The good news is that amid all this, the American public knows more about the Constitution and the separation of powers than in the recent past, according to the 2019 Annenberg Constitution Day Civics Survey.

On various topics, the latest Annenberg civics knowledge survey finds more U.S. adults responding correctly to questions about civics and constitutional rights. Although many still show a surprising lack of knowledge about the Constitution, there are signs of improvement. 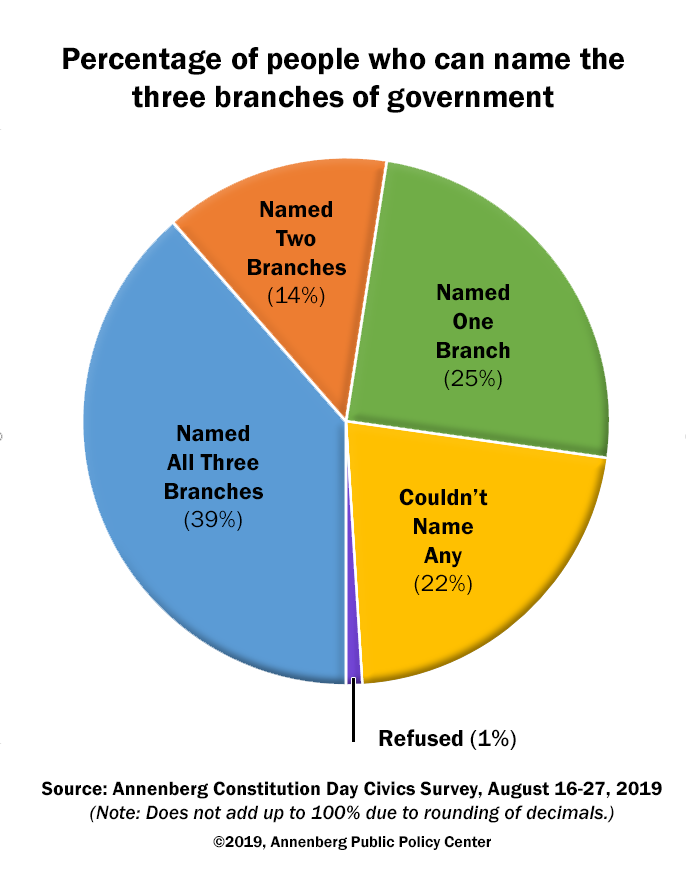 The survey, conducted in August by the Annenberg Public Policy Center, finds that 2 in 5 American adults (39%) correctly named the three branches of government: executive, legislative and judicial. That is the highest in five years, statistically the same as the prior high of 38% in 2013 and 2011 and a substantial increase over last year, when 32% could do the same.

The value of high school civics – and news consumption

The survey found a link between high school civics classes and civics knowledge. A regression analysis showed that people who said they took high school civics were more likely to know the answers to six survey “knowledge” questions, including naming the branches of government. The same held true for people who said they were greater consumers of the news, whether print, television, or online.

“While this marks an improvement, the overall results remain dismal,” said Kathleen Hall Jamieson, director of the Annenberg Public Policy Center. “A quarter of U.S. adults can name only one of the three branches of government and more than a fifth can’t name any. The resilience of our system of government is best protected by an informed citizenry. And civics education and attention to news increase that likelihood.”

Congress is considering a measure to enhance civics education by appropriating $30 million to “prioritize innovative civics learning and teaching” in elementary, middle, and high schools. The Civics Learning Act of 2019, sponsored by Rep. Alcee L. Hastings (D., Fl.) and 62 cosponsors, cites the Annenberg Constitution Day Civics Survey and notes that a “lack of knowledge on the basics of the structure of our democratic republic creates an increasingly ill-prepared electorate which overtime [sic] has, and will continue to, contribute to a weakened democracy.” 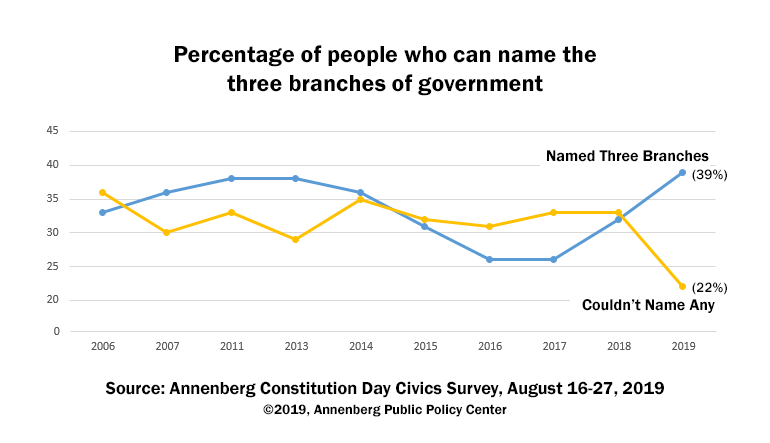 The survey, released for Constitution Day (Sept. 17), was conducted August 16 to 27, 2019, for the Annenberg Public Policy Center (APPC) of the University of Pennsylvania by SSRS, an independent research company. Interviews were conducted with 1,104 U.S. adults, ages 18 and older, including 770 via cell phone and 38 in Spanish. The margin of error was ±3.6 percentage points. For the questions and more details, download the Appendix.

The Supreme Court, immigration, and overriding a veto

Evidence of growing civics knowledge isn’t seen only in the three branches question. Correct responses to other knowledge questions are at or near highs for this survey, which has been conducted 10 times since 2006. For example:

The Second Amendment and more

Most respondents correctly answered questions about a Second Amendment right, protection against self-incrimination, and the way the Constitution resolves a conflict between the Supreme Court and the president:

The Annenberg Civics Knowledge Survey is released by APPC for Constitution Day, which celebrates the signing of the Constitution in 1787. The Annenberg Public Policy Center’s activities to enhance civics education include Annenberg Classroom, which offers free classroom resources for teaching the Constitution, and the Civics Renewal Network (CRN), a coalition of over 30 nonpartisan, nonprofit organizations seeking to raise the visibility of civics education by providing free, high-quality resources for teachers of all grade levels.

CRN offers a Constitution Day Teacher Toolkit for classrooms. Annenberg Classroom recently released the video “The 19th Amendment: A Woman’s Right to Vote,” chronicling the struggle for equal rights, one year before the centennial celebration of the 19th Amendment.

* For example, the U.S. Supreme Court ruled in Plyler v. Doe (1982) that a Texas law denying state funding to educate undocumented children violated the Equal Protection Clause of the Fourteenth Amendment. The court noted that “Aliens, even aliens whose presence in this country is unlawful, have long been recognized as ‘persons’ guaranteed due process of law by the Fifth and Fourteenth Amendments.”