After two years of considerable improvement, Americans’ knowledge of some basic facts about their government has fallen to earlier levels, with less than half of those surveyed able to name the three branches of government for the 2022 Annenberg Constitution Day Civics Survey.

The Annenberg Public Policy Center’s annual, nationally representative survey showed notable increases in 2020 and 2021 after tumultuous years that put the role of government and the three branches under a media spotlight. In those two years, the survey was run amid a pandemic and government health restrictions, two impeachment inquiries, a presidential election, an attempt to disrupt congressional certification of the electoral vote, criminal trials of the individuals charged in the assault on the U.S. Capitol, and waves of social justice protests, among other events.

The current survey, released for Constitution Day (Sept. 17), found the first drop in six years among those who could identify all three branches of government, and declines among those who could name the First Amendment rights, though knowledge remained high on some other questions. Additional findings on the Supreme Court will be released next month.

“When it comes to civics, knowledge is power,” said Kathleen Hall Jamieson, director of the Annenberg Public Policy Center of the University of Pennsylvania. “It’s troubling that so few know what rights we’re guaranteed by the First Amendment. We are unlikely to cherish, protect, and exercise rights if we don’t know that we have them.”

The Annenberg Constitution Day Civics Survey is a nationally representative survey conducted annually in advance of Constitution Day by the Annenberg Public Policy Center (APPC) of the University of Pennsylvania. This year’s survey of 1,113 U.S. adults was conducted by phone for APPC by independent research company SSRS on August 2-13, 2022. It has a margin of error of ± 3.6 percentage points at the 95% confidence level. The year-to-year changes reported here are statistically significant unless noted otherwise. For the questions and additional data, see the appendix and the methodology statement.

The three branches and how government works

The three branches: The survey found a significant drop in the percentage of respondents who named all three branches of government – executive, legislative, and judicial. This year, 47% named all three, down from 56% in 2021. One in 4 people (25%) could not name any, up from 20% in 2021. 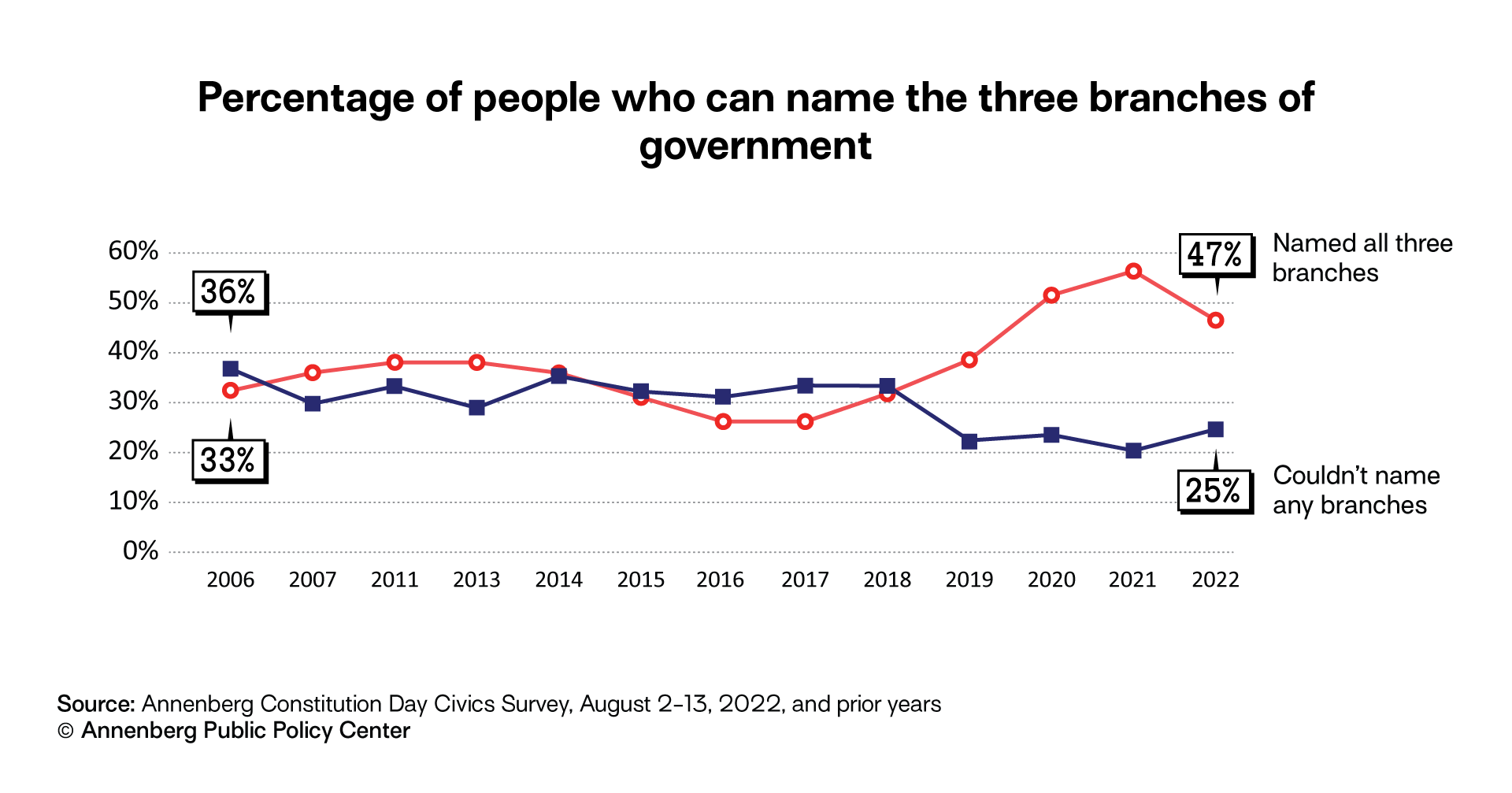 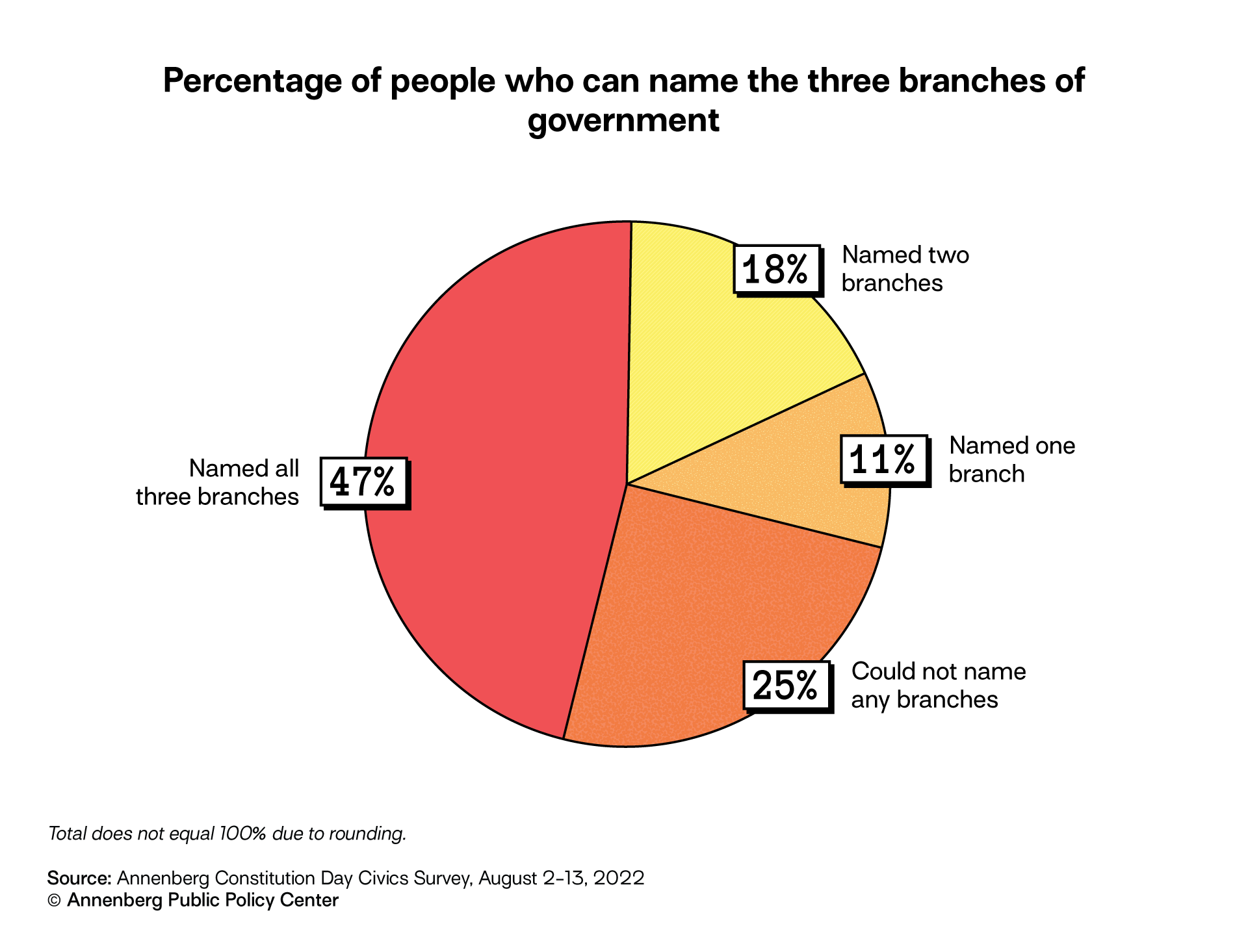 The number of individuals who incorrectly named the right to bear arms – which is guaranteed under the Second Amendment, not the First – tripled to 9% from 3% in 2020 and 2021. In June, gun rights were in the news when the Supreme Court ruled to expand the right to carry guns in public places and when Congress passed gun safety legislation.

A large majority knows there is a personal right to own a gun: 82% say it is accurate to state that the Supreme Court has held that a citizen has a constitutional right to own a handgun (unchanged statistically from 83% in 2019). 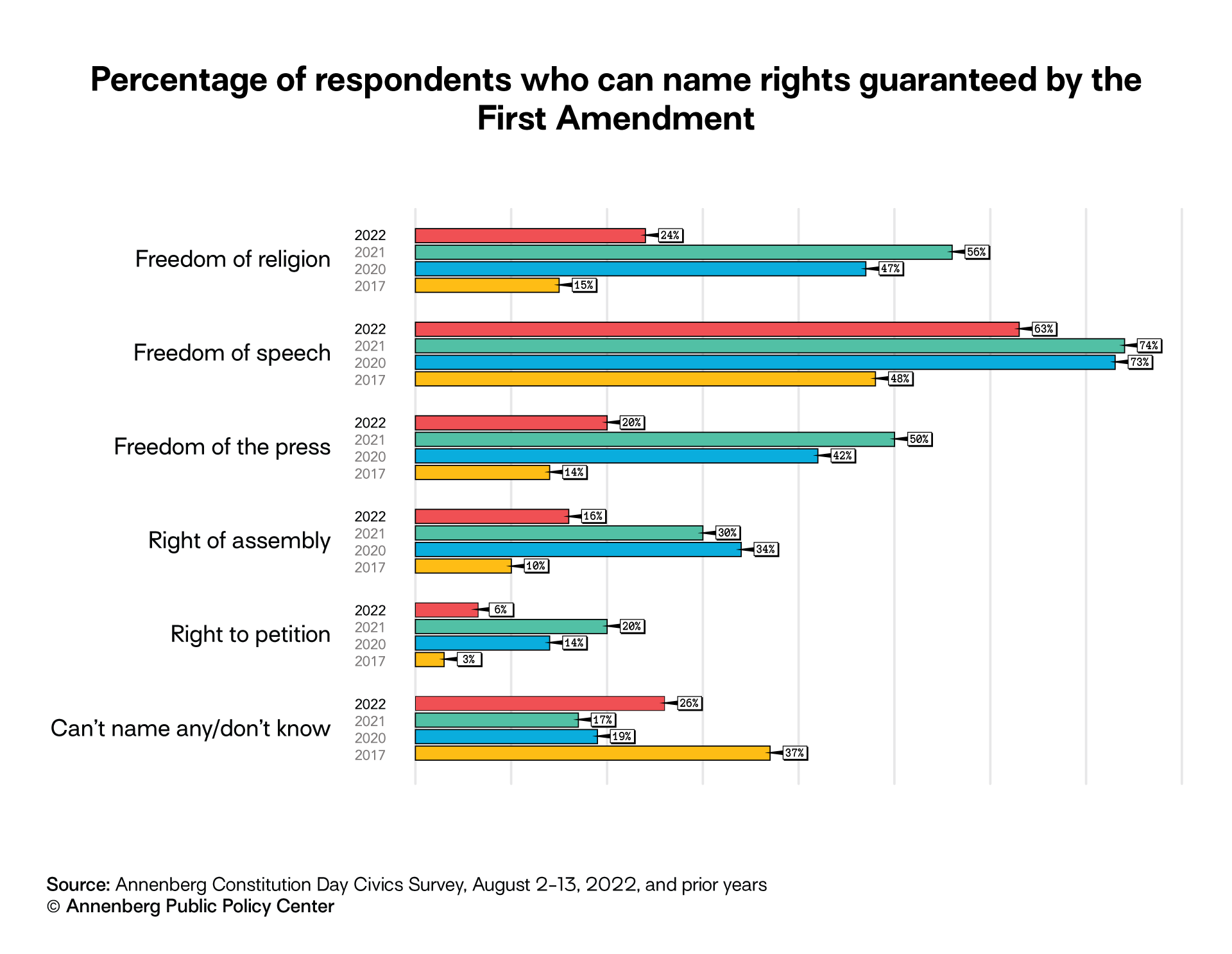 Facebook and the First Amendment: Over half of those surveyed (51%, compared with 61% in 2021) incorrectly believe it’s accurate to state that the First Amendment’s protection of freedom of speech means that Facebook must permit all Americans to freely express themselves on Facebook pages. The First Amendment protects citizens from government censorship, but social media companies such as Facebook are private companies and courts have ruled private entities are not covered by it.

The 2022 survey found that a strong majority knows the correct answer to some questions:

And most can identify certain inaccurate claims, though substantial numbers are unsure:

An APPC analysis found that taking a high school civics class continues to be associated with correct answers to civics knowledge questions, including knowledge of the three branches; knowledge of First Amendment rights; the meaning of a 5-4 Supreme Court decision; the Supreme Court having the final say on the constitutionality of a president’s actions; and knowing that Facebook is not covered by the First Amendment.

In 2022, nearly two-thirds (65%) of respondents with at least some high school education said they had taken a civics course in high school that focused on the Constitution or judicial system, about the same as in previous years we have asked this question. More than a third of those with at least some college education (36%) said they had taken a college course that focused on the U.S. system of government and the Constitution, significantly fewer than in 2021 but about the same as in 2019 (38%).

The Annenberg Civics Knowledge Survey is released by APPC for Constitution Day, which celebrates the signing of the Constitution on Sept. 17, 1787. APPC’s activities to enhance civics education include Annenberg Classroom, which offers free resources for teaching the Constitution, and the Civics Renewal Network, a coalition of 39 nonpartisan, nonprofit organizations seeking to improve civics education by providing free, high-quality resources for teachers. Among those resources: CRN’s Constitution Day Toolkit for teachers and an Annenberg Classroom film on the First Amendment and student freedom of speech, one in a series of award-winning videos.