The holiday-suicide myth, the false claim that the suicide rate rises during the year-end holiday season, persisted in some news coverage through the 2021-22 holidays, according to U.S. media data collected and analyzed by the Annenberg Public Policy Center (APPC).

In fact, although the U.S. suicide rate increased in 2021 after two years of declines, the average daily suicide rate during the holiday months remained among the lower rates of the year.

APPC’s media analysis, which is based on newspaper stories published over the 2021-22 holiday season, found that a little more than half of the stories that directly discussed the holidays and the suicide rate supported the false myth, while the remainder debunked it.

For over two decades, the Annenberg Public Policy Center has sought to correct the popular misconception linking the holidays with suicide by analyzing newspaper stories to see whether they perpetuated or debunked the holiday-suicide myth. Over the 2021-22 holiday season, only 25 stories made the connection, with 14 of those perpetuating the myth (56%) and 11 debunking it (44%) – among the lowest total counts since APPC has tracked this. (See Figs. 1 and 2.) 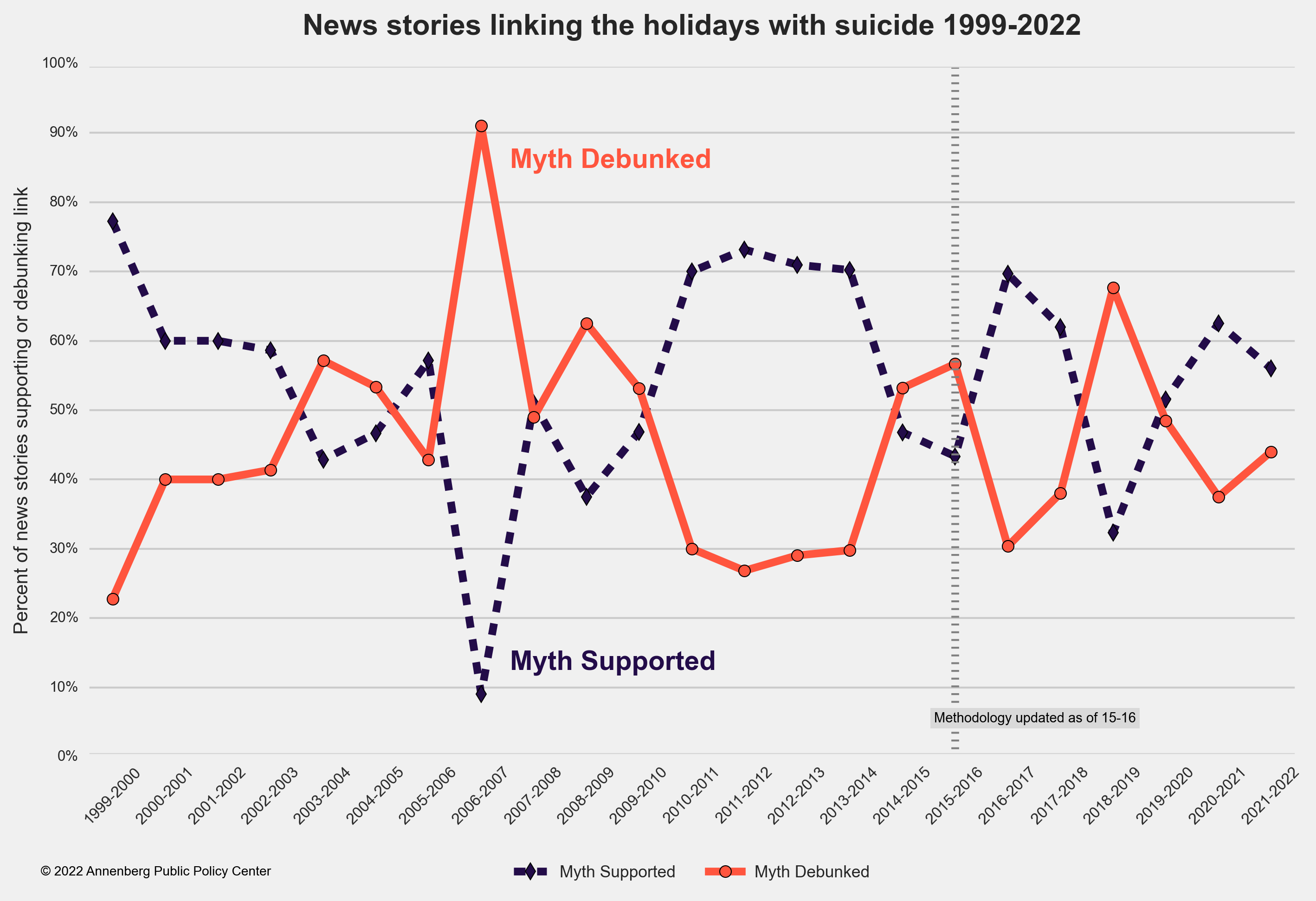 Fig. 1. Percentage of stories supporting the myth vs. those debunking it, from the 1999-2000 through 2021-22 holiday seasons. Source: Annenberg Public Policy Center.

“Our experience in tracking news stories about suicide over the holidays shows how difficult it is stamp out this myth,” said Dan Romer, research director of the Annenberg Public Policy Center. “In the 23 years of our study, only nine years had higher rates of debunking of the myth and only three of those occurred in the last 10 years.” 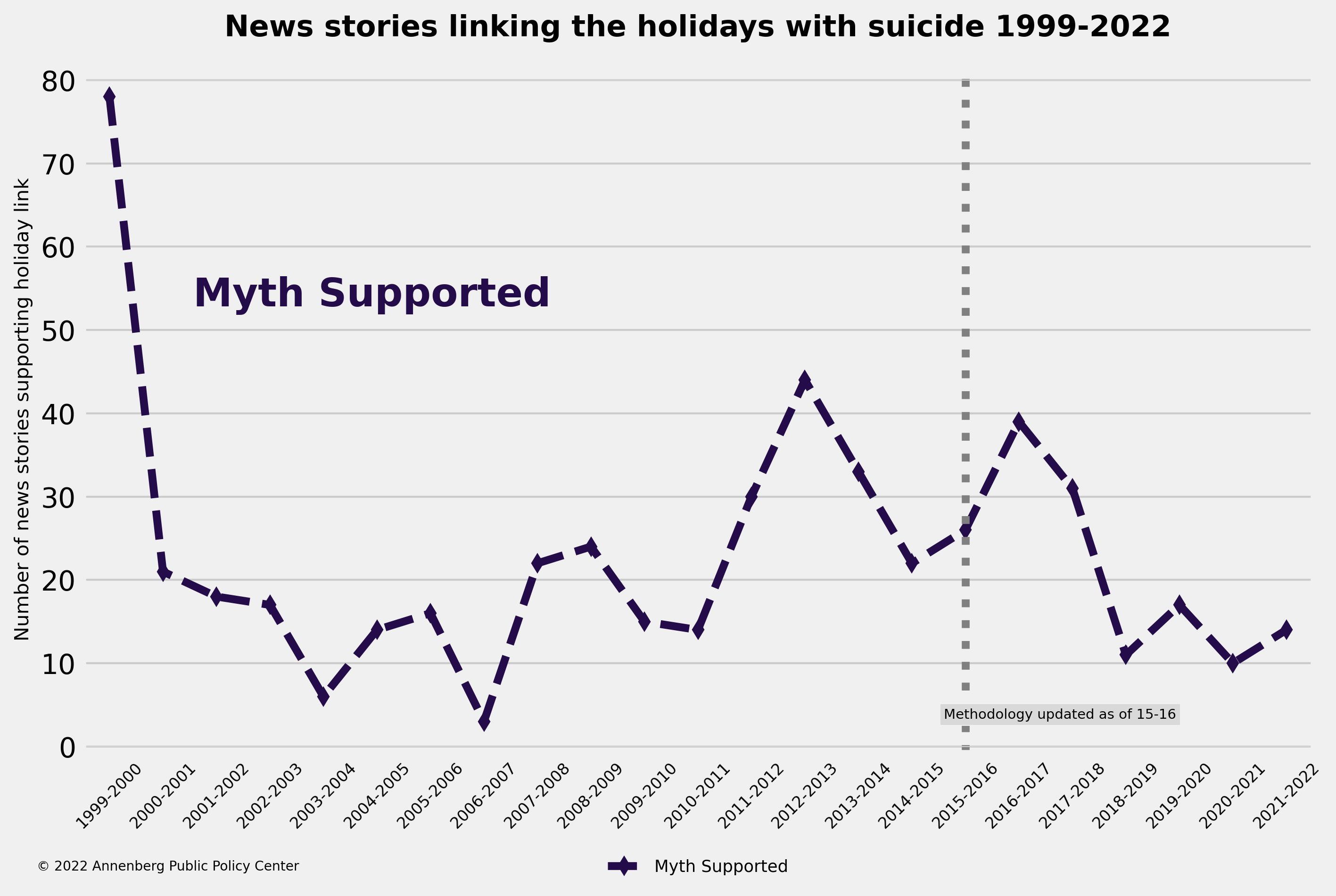 During 2020, the Covid-19 pandemic was declared, followed by lockdowns in parts of the United States. According to provisional data released by the CDC’s National Center for Health Statistics in September 2022, the number of suicides in 2021 was 4% higher than in 2020.

The CDC noted that the monthly number of suicides was lower in 2021 than in 2020 in January, February, and July, and higher in all of the other months.

In 2021, the average number of U.S. suicide deaths per day in January and December put those two months among the lowest of the 12 months – 10th and 12th, respectively. The suicide rate in November in 2021 made it 7th among the 12 months. The month with the highest rate of suicides in 2021 was August. (See Fig. 3 and Table 1.) 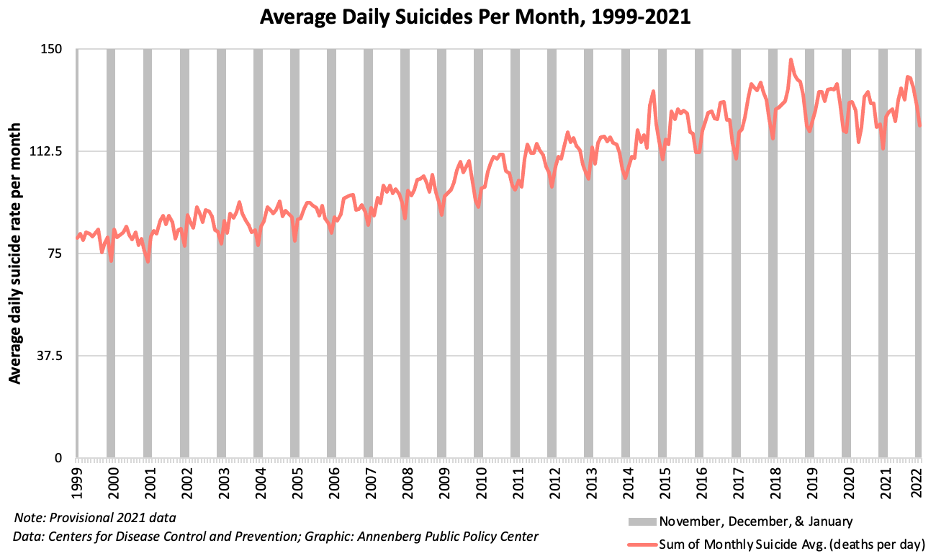 Fig. 3. Average number of suicides per day in each month from January 1999-December 2021. The holiday-season months November to January are shaded. Data: Centers for Disease Control and Prevention’s National Center for Health Statistics. The 2021 data are provisional. Graphic: Annenberg Public Policy Center.

“For some people this may be an emotionally fraught time of year,” Romer said. “With stories focusing on the holiday blues, seasonal affective disorder, and other changes in the seasons, there are a lot of factors that would seem to support the myth. There is also concern for those who have lost friends and family during the year and who may be experiencing sadness about those losses. But we should not assume that these experiences lead people to suicide.” 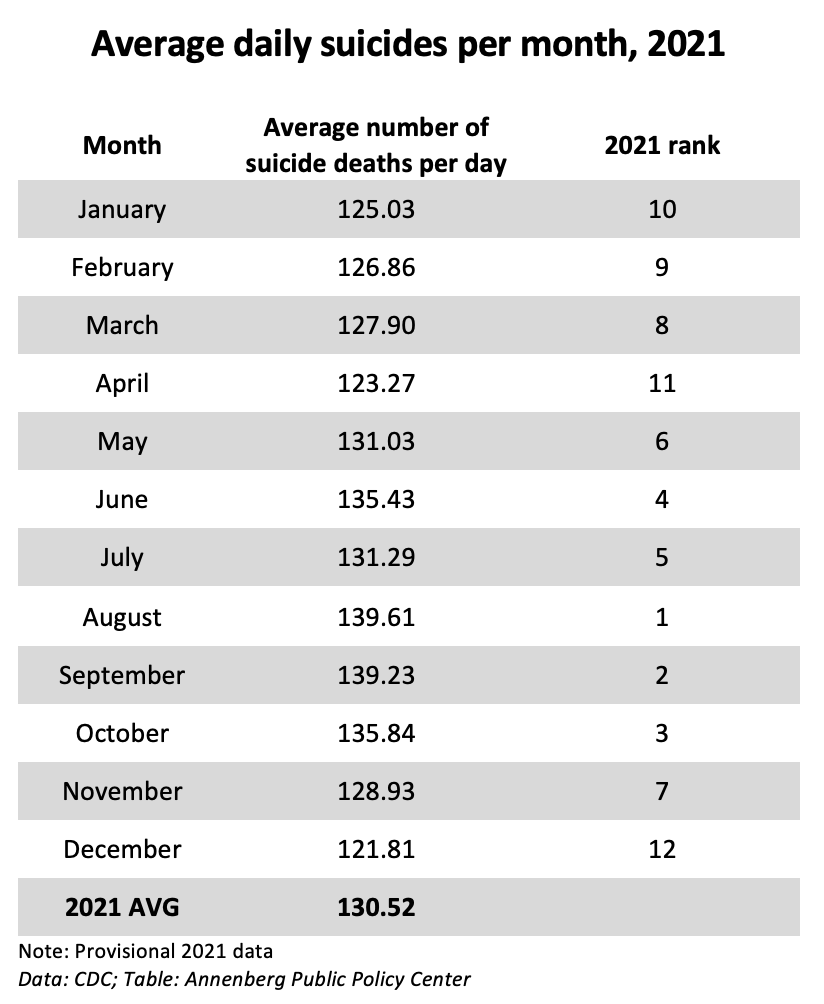 Table 1. Average number of suicides per day in each month in 2021. The 2021 data are provisional. Data: Centers for Disease Control and Prevention’s National Center for Health Statistics. Table: Annenberg Public Policy Center.

At the same time, the pandemic exacerbated levels of anxiety and depression, particularly among young people.

From Dec. 29, 2021-January 10, 2022, for example, 47.5% of 18- to 29-year-olds in the United States showed symptoms of anxiety disorder or depressive disorder, according to surveys conducted by the U.S. Census Bureau and the National Center for Health Statistics. That compared with 32.1% for the overall U.S. rate during that period.

Perpetuating or debunking the holiday-suicide myth

APPC has analyzed news coverage of the holiday-suicide myth across 23 holiday seasons, from 1999-2000 through 2021-22. In most of those years, more newspaper stories supported the myth than debunked it, as was the case over the 2021-22 holidays.

The false connection between the holidays and suicide can be seen in stories such as these:

Stories debunking the myth include these:

Why it’s important to dispel the holiday-suicide myth

It’s important for reporters and news organizations to dispel the myth because allowing people to think that suicide is more likely during the holiday season can have contagious effects on people who are contemplating suicide. National recommendations for reporting on suicide advise journalists not to promote information that can increase contagion, such as reports of epidemics or seasonal increases, especially when the claim has no basis in fact. The national recommendations, which were developed by journalism and suicide-prevention groups along with the Annenberg Public Policy Center, say that reporters should consult reliable sources such as the CDC on suicide rates and provide information about resources that can help people in need.

Journalists helping to dispel the holiday-suicide myth can provide resources for readers who are in or know of someone who is in a potential crisis. Those offering valuable information include the CDC, the Suicide Prevention Resource Center, the National Institute of Mental Health, and the Substance Abuse and Mental Health Services Administration (SAMHSA). In July 2022, the National Suicide Prevention Lifeline was renamed the 988 Suicide & Crisis Lifeline, and 9-8-8 was officially implemented as the hotline’s three-digit nationwide telephone number.

News and feature stories linking suicide with the holidays were identified through searches of both the LexisNexis and NewsBank databases. The researchers used the search terms “suicide” or “suicides” with variations of the words “holiday,” “Christmas,” “New Years,” “increase,” “peak,” and “rise,” from November 15, 2021, through January 31, 2022. APPC’s searches originally used the LexisNexis database but were expanded in 2019 to include NewsBank for wider coverage of the U.S. press. A reanalysis of past years since 2015-16, including NewsBank, did not substantially alter the proportion of stories debunking or supporting the myth. Researchers determined whether the stories supported the link, debunked it, or showed a coincidental reference. Coincidental stories were eliminated. Only domestic suicides were counted; overseas suicide bombings, for example, were excluded.

Lauren Hawkins and Madison Russ collected and supervised the coding of the stories, and Thomas Christaldi, Sienna Horvath, Tara Shilkret, and Julia Van Lare did the coding.