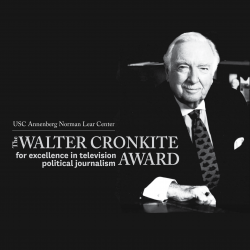 The Cronkite/Jackson Prize, as it is also known, administered by the Annenberg Public Policy Center, is part of the biennial Walter Cronkite Awards for excellence in television political journalism, presented by the USC Annenberg School for Communication and Journalism’s Norman Lear Center.

The awards were presented in a virtual ceremony on July 29, 2021. See videos about the winners.

The jury for the Cronkite/Jackson Prize praised Gupta as an important voice through the pandemic, working in a variety of media formats, including on-air fact-checking segments, town halls, and a Covid-19 podcast. The jury said:

“Dr. Gupta has been a consistent and reliable messenger for accurate information. He delivers the facts clearly and states them with purpose and authority.”

The Jackson Prize honors Brooks Jackson, the veteran journalist who co-founded FactCheck.org in 2003 at the Annenberg Public Policy Center with APPC director Kathleen Hall Jamieson. Jackson, the director emeritus of FactCheck.org, had previously worked for news organizations including the Associated Press, the Wall Street Journal, and CNN. At CNN he pioneered the “ad watch” and “fact check” formats of stories debunking false and misleading political statements.

In an interview, APPC Director Kathleen Hall Jamieson spoke with Gupta about his work.

The Cronkite Awards, named for the legendary journalist and CBS evening television news anchor, spotlight journalism “that seeks truths, examines inequities, serves the public and demonstrates the indispensability of a free and trustworthy press,” according to USC Annenberg.

Read more about the winners in the USC Annenberg Norman Lear Center’s announcement.

Read about the past several winners of the Cronkite/Jackson Prize here, here and here.

Originally posted on June 2, 2021, this story was updated on July 29 following the online ceremony.