The University of Pennsylvania’s Center for Ethics and the Rule of Law (CERL) and Annenberg Public Policy Center (APPC) today released Lessons from the Arctic: The Need for Intersectoral Climate Security Policy, a report on critical climate-change security issues with recommendations written by Alexandra A.K. Meise, Senior Fellow at CERL.

“The 2018 National Defense Authorization Act affirmed that ‘climate change presents a direct threat to national security,’ but most people don’t fully understand the repercussions—not just to the environment but also to the economy, military readiness, human security, spread of disease, migration, and more,” Meise said. “This report aims to educate people about these threats and make clear why an all-encompassing security strategy is imperative.” 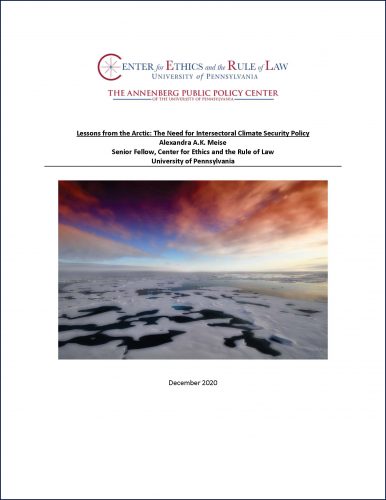 Drawing on the documented effects of climate change in the Arctic region and beyond, Meise identifies security threats, challenges, and opportunities posed by climate change across economic, human, and hard security sectors. The report details fragmented approaches to climate change policy; calls for coordinated policy support from federal, state, and local government; and makes recommendations for how the Biden-Harris administration should prioritize institutional expertise, appointments, and international outreach to facilitate an integrated climate security approach and agenda.

“CERL views climate change as a national security threat that raises myriad ethics and rule of law issues, especially with regard to the communities and livelihood of Indigenous peoples as well as nations’ unilateral territorial shifts to capitalize on new commercial opportunities,” said Claire Finkelstein, law professor at the University of Pennsylvania Carey Law School and faculty director of CERL. “Xander’s report sheds vital light on these and other areas of intense concern.”

Meise added, “To secure the United States against climate’s threats, there needs to be a whole-of-government, whole-of-society approach on a scale that so far has been out of our country’s reach. But the Biden-Harris administration has committed to taking bold action to address climate change as a national security threat. Given the appointments the transition has announced so far, we anticipate progress on this front, especially if the new Congress also supports climate action.”

The report was preceded by Circling the Arctic: Security and the Rule of Law in a Changing North, an online conference held on October 1-3, 2020. The conference was organized by CERL and APPC in partnership with the Wilson Center’s Polar Institute. Read more about the conference here.

The Annenberg Public Policy Center (APPC) was established in 1993 to educate the public and policy makers about communication’s role in advancing public understanding of political, health, and science issues at the local, state, and federal levels.

Read more about APPC’s alliance with CERL to strengthen the rule of law in democratic institutions.